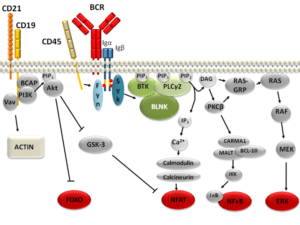 B cells are not only important for producing antibodies but they also aid the T cell arm of the immune response by antigen presentation.  This study showed that B cells in individuals with tuberculosis (TB) infection had less B cells in circulation and the B cells which were present were mostly dysfunctional. However, upon TB treatment, the B cells regained regular function.

B cells have various functions including antigen presentation, cytokine production, co-stimulatory signalling as well as a role in immunoregulation. B cells have been less studied in TB disease as the bacterium has been shown to elicit a strong innate and T cell response. Studies have produced different results in regards to the role of B cells in TB disease.  For example, some studies have shown that the frequencies of B cells in active TB are decreased, another study says the frequency increases while yet another says the B cells are left unchanged.

Interestingly, the researchers found that the individuals with active TB had B cells with substantially reduced function as opposed to the controls. This B cell impairment was also observed for individuals who had latent TB infected. The main B cells dysfunctions were shown to be decreased proliferation and less antibody and cytokine production. The data also showed that the B cells returned to normal function upon successful treatment of the TB infection.

This study shows that B cell functions are substantially affected by TB infection and highlights an important role for B cells in TB disease. Dysfunctional B cells cannot adequately present antigens to T cells which may aid in the survival of the bacteria.