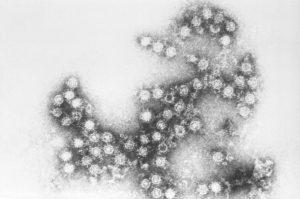 Insulin is a hormone produced by the pancreatic beta cells that reduces blood sugar levels by up-regulating glucose intake in cells. In type 1 diabetes (T1D) patients, pancreatic beta cells are impaired by autoimmune reactions and cease insulin production. A lack of insulin causes hyperglycaemia, leading to a wide range of dangerous symptoms including death. There is no consensus on the exact cause of T1D, but researchers from the University of Tampere led by Heikki Hyöty have recently linked enteroviruses from the group B coxsackieviruses to T1D.

Coxsackie B viruses are responsible for many common diseases and can lead to secondary organ infections. In a study conducted by Hyöty et al., neutralizing antibodies were screened against 41 different types of enteroviruses in a longitudinal sample series. 183 case children who tested positive for at least 2 diabetes-predictive autoantibodies were tested along with 366 control children who tested negative for autoantibodies. A correlation was found between coxsackievirus B1 and an increased risk of pancreatic beta cell autoimmunity. A reduced risk was also associated with coxsackieviruses B3 and B6. This study supported the theory that enteroviruses could increase the risk of developing T1D.

Based on this, Hyöty et al. prototyped a vaccine against coxsackievirus B which has worked successfully in mice. They then optimized a scalable production protocol for coxsackie B vaccines. The effectiveness of coxsackie B vaccines has been demonstrated in a murine model and Hyöty et al. will soon start a clinical trial on humans. If this vaccine is successful, a potential T1D vaccine would be available in the near future.

Hankaniemi et al., 2017. Optimized production and purification of Coxsackievirus B1 vaccine and its preclinical evaluation in a mouse model. Vaccine