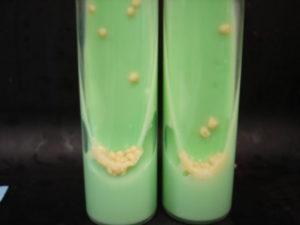 Mycobacterium tuberculosis (Mtb) is a bacterium responsible for Tuberculosis disease. Mtb infection results in months of antibiotic treatment due to the survival of a small subset of bacteria. The bacterium created variability after each cell division, with the progeny having difference growth rates and sizes. Scientists have identified a gene, lamA, whose deletion results in the elimination of heterogeneous Mtb populations. This finding has implications in TB therapy as a less heterogeneous Mtb population may require shorter treatment regimes.

The majority of Mtb bacilli are killed rapidly after starting treatment. However, there are bacteria which persist and therefore TB therapy must be taken for at least 6 months to effectively kill all the bacteria. The differences in susceptibility is due to heterogeneity amongst Mtb pathogens in the infected individual.

Since the cause of this heterogeneity was unknown, scientists, led by Eric Rubin, investigated this further. The researchers used a fluorescent reporter and FACS-based screen to observe the growth and division of M. smegmatis, a usually non-pathogen type of mycobacteria. Each bacterium in the population stained different upon addition of fluorescent dyes. The fluorescence intensity of each bacterium correlated with its susceptibility to rifampicin – a first line drug in TB treatment.

The researchers found that deletion of a gene known as lamA resulted in decreased heterogeneity and the mechanism was through the decrease of asymmetric polar growth. The function of this gene was previously unknown and interestingly, the resulting protein, LamA, has no homologues. However, the protein is well conserved throughout mycobacterial species. Cells which have the lamA deletion are more similar to each other and are killed by rifampicin at the same rate.

Altogether, these results show that deletion of a certain gene can help in creating Mtb homogeneity. Finding LamA inhibitors would be a crucial next step as these inhibitors could be used in combination with TB therapies to reduce the time needed to complete the treatment course.