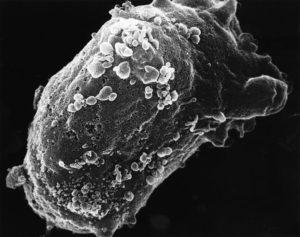 Understanding how bnAbs are produced in natural infection may aid in the design of an immunogen that can elicit such responses and prevent HIV infection. In  HIV-infected individuals, bnAbs usually emerge in chronic infection (more than 1 year after infection) and this is only in a small fraction of people with HIV.

The germinal center reaction is a key part of producing bnAbs. B cells and T follicular helper cells work together to develop these highly mutated and unusual antibodies. Levels of the chemokine CXCL13 have been shown to associated with the quality of these germinal centers. BAFF, a B-cell associated cytokine, has also been shown to influence the development of bnAbs.

The frequency of B cell subsets has been shown to be disrupted in both acute and chronic infection in ART-naive individuals. B cell subsets following HIV infection are usually immature or transitional and there are increased tissue-like memory B cells and less resting memory B cells. Some B cell dysfunction is still observed in individuals on ART.

Before this study, it was unclear whether the B cell subset frequencies and their changes had an effect on the development of bnAbs. The role of CXCl13 and BAFF levels in acute infection to predict bnAb development at a later date was also not well understood. This made researchers from the Africa Health Research Institute in Durban, South Africa investigate this further.

The researchers, led by Thumbi Ndung’u, used samples from young women infected with HIV subtype C. They obtained samples pre- and post-infection from these participants. They team longitudinally measured changes to the B cell subsets and plasma CXCL13 and BAFF after HIV infection. The team also determined which participants developed bnAbs later in chronic infection. The study found that B cell frequencies in acute infection did not predict whether one would develop bnAbs or not. They found that BAFF and CXCL13 levels in the plasma of these participants were not associated with the viral load. The levels of BAFF and CXCL13 increased after HIV infection only in women who were not on ART. Importantly, plasma CXCL13 levels in acute infection were found to predict the development of bnAbs at 12 months post-infection. BAFF levels were not able to predict bnAb development.

This study suggests that CXCL13 may be used as a biomarker to predict the development of bnAbs. This may be useful to predict the effects of a vaccine early after it has been administered rather than waiting for bnAbs to be detectable in patient plasma. Plasma CXCL13 levels in acute infection can also be used to better understand the development of bnAbs in natural infection.