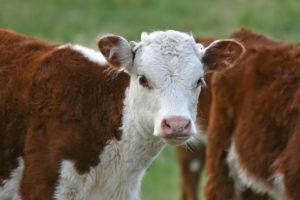 One of the challenges with HIV antibody-based candidate immunogens is that they have failed to elicit broadly neutralizing antibody (bnAb) responses. HIV is a very diverse virus with numerous subtypes and different isolates within subtypes. Therefore, the goal of an effective global vaccine would be to elicit bnAbs which can prevent the entry of most of the different HIV strains. Before this study, immunizations with various HIV Envelope (Env) protein immunogens have failed to elicit bnAbs but now researchers from The Scripps Research Institute immunized 4 cows with a recombinant Env trimer protein and found that these cows developed bnAbs. These immunization-elicited antibodies were capable of neutralizing most HIV isolates tested after a very short time after immunization.

Only a very small percentage of HIV-infected individuals develop bnAbs and in the ones who do, the bnAbs only develop in chronic infection, usually 2-3 years post-infection. Previous studies in rabbits, guinea pigs and macaques using Env recombinant trimer proteins known as SOSIP trimers have resulted in the development of robust, potent antibodies but they were not broadly neutralizing. Therefore, researchers have been trying to understand why immunogens are unable to elicit bnAbs and how they can elicit these antibodies in a shorter time frame than in natural infection.

Researchers, led by Dennis Burton, immunized four 6-month old Bos taurus calves with recombinant Env SOSIP trimers in a prime-boost strategy using intradermal inoculation. Blood samples were taken for the cows throughout the process until day 381 and antibodies in the blood were tested for how well they could neutralize various HIV isolates.

All 4 cows develop potent and broad neutralising responses. One cow developed potent bnAbs capable of neutralizing 20% of a 117 virus panel after just 42 days of immunization. At 381 days, the antibodies from this cow were able to neutralize 96% of the virus panel. This is the first HIV immunization study to show such high levels of breadth after immunization.

One of the unusual features of HIV-specific bnAbs is that they contain very long third heavy chain complementarity determining regions (HCDR3s). This rare feature enables bnAbs to penetrate the dense protective glycan shield of the virus and access the underlying epitopes, however, most people do not develop antibodies with such long HCDR3s. The researchers specifically looked at cows because cow antibodies commonly have long HCDR3s. They isolated a monoclonal antibody from the blood of one of the cows and found that it had very long HCDR3s and was able to potently neutralize 72% of the virus panel.

Altogether, this study demonstrates that using HIV trimers as immunogens can elicit bnAbs but selection of long HCDR3s may help in speeding up the process.  It may be useful to further explore using cow immunizations to elicit fast antibody responses in other disease models as well as HIV. The bnAbs elicited from such studies could aid in passive immunization and may help in defining the targets of vaccine design.