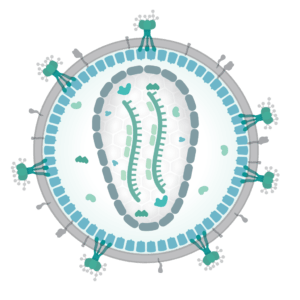 Although there are many drugs targeted against HIV, there is no cure for the virus. Eventually, the virus usually will overcome the drug pressure and continue replication, leading to AIDS. This led researchers, led by Florian Klein to look at broadly neutralizing antibodies in controlling HIV replication. The scientists tested how well two antibodies known as 10-1074 and 3BNC117 are be able to control SHIV, a modified primate version of HIV, in macaques.

10-1074 and 3BNC117 are broadly neutralizing antibodies, able to neutralize a diverse range of HIV strains. These antibodies were both isolated from individuals who are known as elite controllers because they are able to control their virus to very low levels over extended periods of time. These antibodies bind to different sites on the HIV Envelope which may aid in preventing viral escape from both antibodies.

The researchers infected 13 macaques with SHIV, followed by 2 weeks of infusions with the two broadly neutralizing antibodies. With this early administration of antibody after infection.the researchers found that the antibodies were able to control the virus to undetectable levels in some of the macaques. Virus was undetectable in the animals for up to 177 days.

Four macaques were able to maintain very low viral loads for more than 2 years, however, one animal experienced viral rebound. The next steps in the study will be to infuse with these antibodies after a longer exposure to the virus to see if the effect is still seen. This is important as most people do not know they are HIV positive in the very early stages of infection and would therefore only start antibody treatment after a longer time period.

Altogether, these data show that a combination of two broadly neutralizing antibodies against HIV may be sufficient to control the virus from replicating. If further macaque studies are successful, human trials should be initiated to see if the results are transferrable to HIV in humans.