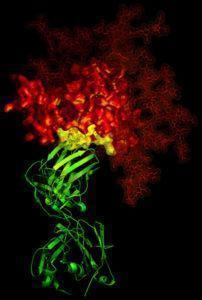 Understanding where broadly neutralizing antibodies (bnAbs) bind to the HIV trimer may be important in designing effective immunogens that can protect against HIV acquisition. Researchers from the National Institute for Communicable Diseases, South Africa, isolated a novel antibody against a distinct site of the gp120-gp41 interface of the HIV trimer. Mutating this epitope led to the exposure of a different bnAb epitope that is usually hidden away. Including these mutations in an HIV immunogen may result an improved antibody response.

Currently, there are several sites which have been identified where bnAbs bind to the HIV Envelope trimer. On gp120, there is the V2/apex, V3/glycans and CD4-binding site. In the gp41 subunit of the trimer there is the membrane proximal external region (MPER) and the fusion peptide. Recently, researchers have identified another epitope for bnAb binding which is not well characterized known as the gp120-gp41 interface.

The researchers, led by Penny Moore, isolated an antibody from a young women from South Africa who had broadly neutralizing plasma known as CAP248-2B. They found that this antibody was cross-reactive – able to neutralize different HIV strains – and that it bound to the gp120-gp41 interface.

Compared to other antibodies which bind to this site, this antibody was more proximal to the membrane, with part of the structure actually interacting with the viral membrane. The epitope for CAP248-2B was mapped to the HIV cleavage site as well as components of gp41. Neutralizing of this antibody was not found to be dependent on any of the glycans on the HIV Envelope and it was not autoreactive.

Interestingly, mutations in the cleavage site which abrogated binding of CAP248-2B to the HIV Envelope resulted in enhanced neutralization through the MPER epitope. It is usually hard for antibodies to penetrate the MPER and therefore increased exposure of the MPER would be useful in getting anti-MPER antibodies to bind.

Together, these data shows a novel mechanism for antibody binding to the gp120-gp41 interface. The study shows that introducing mutations to the HIV cleavage site results in enhanced neutralization abilities of anti-MPER antibodies. Introducing these mutations into an HIV immunogen may aid in eliciting bnAbs against the MPER site.