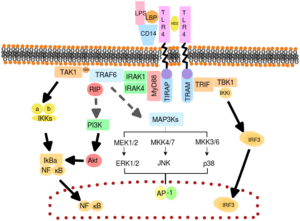 During the last decade, the gut microbiome configuration has been linked to a large range of diseases from obesity, explained through its ability to regulate metabolic parameters, to inflammatory bowel disease as consequence of the modulation of host immunity. However, gut microbiome influence appears to target far beyond the gut reaching unrelated organs.

After the moving of mice genetically modified to study the development of cerebral cavernous malformations (CCM) to a new vivarium, Kahn’s group from the University of Pennsylvania observed the divergence of a previously homogeneous CCM-susceptible mice population, into resistant and susceptible subcolonies. Mice that remained susceptible to CCM disease, coincided with intra-abdominal abscesses colonized with gram-negative bacteria. After this finding, a series of experiments evidenced that bacteria-derived signals, such as TLR4 or TLR3 ligands, targeting specifically endothelial brain cells are critical drivers on the development of CCM lesions. Concordantly, an analysis on a cohort of 188 patients sharing the same mutation related to CCM, showed a relationship between the expression of single-nucleotide polymorphisms specifically on TLR4 and CD14 ( TLR4 co-receptor) genes, and the incidence of CCM formations.

In order to look for an intrinsic characteristic that explained the susceptibility of some mice colonies to CCM, Kahn and collaborators compared the gut microbiome composition of susceptible and resistant mice, and found a higher presence of gram-negative Bacteroidetes in the first group. The treatment with TLR4 antagonist or antibiotics for microbiome ablation, were sufficient to significantly reduce lesion formation.

Before the current Nature article, the origin of CCM had been mainly associated with genetic mutations on KRIT1, CCM2 or PDCD10 genes. However as in many other diseases, a genetic origin hadn’t been sufficient to explain the variable penetrance among patients sharing the same somatic mutation. The findings published on this work are new evidence that places the microbiome in the spotlight for future development of preventive strategies.