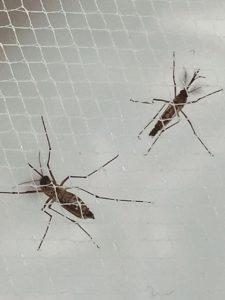 The last Zika virus outbreak gave scientists the urge to understand the virus better in the hope of developing effective treatments and a vaccine to prevent infection. Scientists at the La Jolla Institute for Allery and Immunology, USA, have studied the pathogenesis of Zika virus and shown that CD8 T cells are important in the control of the virus.

Zika virus is spread when an infected Aedes mosquito takes a blood meal from a human. The virus does not usually trigger dangerous symptoms, however, when passed from mother to fetus it may lead to severe birth defects. As there is no vaccine or any effective medications to treat the Zika, more research needs to be done to understand the transmission and pathogenesis of the virus.

Previous studies have shown that these cells are important in controlling Dengue virus – a closely related virus. This led researchers, headed up by Sujan Shresta, to investigate the role of CD8 T cells in Zika infection.

The researchers made LysMCre+IFNARfl/fl mice to investigate the role of CD8 T cell responses in Zika virus infection. These mice were more susceptible to Zika infection. The scientists then took samples from the mice to analyse their CD8 T cells and to investigate which parts of the virus were targeted by the cells.

The researchers found that Zika infection gave rise to CD8 T cells which targeted 3 proteins on the virus known as PrM, E and NS5 proteins. If the mice were given Zika virus-immune CD8 T cells, they saw a decrease in the amount of virus in the mice. Mortality rates were higher in CD8 T cell knockout mice as opposed to controls when infected with Zika virus.

In this study, the researchers developed a novel mouse model for studying T cell reponses towards Zika virus. This model may be used in the future for testing vaccine and therapeutic interventions. The data also shows the importance of CD8 T cells in the control and clearance of Zika virus.