CD161+CD4+ T cells depleted at the Cervix during HIV Infection 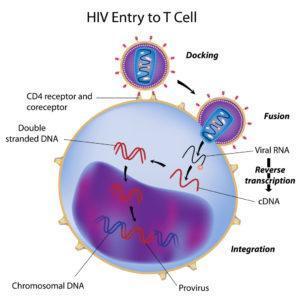 Immune cells that express CD161 are known to play a pathogenic role in autoimmune diseases like Rheumatoid Arthritis and Inflammatory Bowel Disease. The proinflammatory nature of these cells makes them optimal candidates for HIV infection in the Female Reproductive Tract (FRT) where majority of infections begin. Researchers from the Universities of Manitoba and Nairobi have characterized the expression of CD161 on cervical CD4+ T cells and report diminished frequencies of these cells in HIV-infected women.

CD161 is a glycoprotein that is recognized as a biomarker for Th17 cells. Th17 cells are enriched in mucosal compartments where they maintain barrier integrity and provide defense against bacterial and fungal infections. However, the phenotype of these cells at the FRT is not well known. Boily-Larouche et al., observed that HIV uninfected women had higher frequencies of CD161+CD4+ T cells in the cervix compared to blood, with a higher proportion expressing T cell activation markers: CD69, HLA-DR and CD95. Th17 cells also expressed significantly higher levels of the HIV co-receptor, CCR5, in the cervix. Since HIV preferentially infects activated CD4+ T cells, these observations suggest that CD161+CD4+ T cells may serve as HIV target cells at the FRT.

In addition, CD161+CD4+ T cells were more polyfunctional at the FRT than in blood producing both Th1 and Th17 cytokines upon mitogen stimulation, suggesting functional differentiation in Th1/Th17 cells upon migration to the FRT.

An interesting result from this study is that HIV-infected women had significantly lower proportions of CD161+CD4+ T cells at the cervix compared to non-infected women. Taken together, the high expression of activation markers and HIV coreceptor, being the ideal phenotype for HIV infection, translates into depletion of these cells in the genital tract which is the main portal of viral entry in heterosexual transmission. This is an important finding in terms of HIV pathogenesis at mucosal sites.

In summary, the expression of CD161 at the FRT gives an avenue for identification of a subset of highly activated T cells that are pro-inflammatory and express markers of HIV susceptibility. Use of CD161 as a biomarker for HIV target cells could thus eliminate the need for costly and technically demanding functional assessment assays.