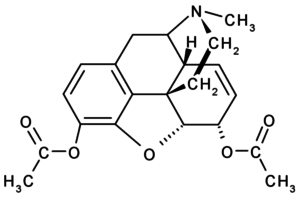 Heroin is a highly addictive opiate and one of the most used drugs worldwide. Researchers from the Scripps Research Institute have developed an anti-heroin vaccine to increase the arsenal of pharmacotherapy available to treat opioid-related disorders.This candidate vaccine has been shown to be effective in non-human primate models.

Specific opioids are clinically used as prescription painkillers, however, their use may result in addiction. Heroin abuse has doubled over the past ten years and has resulted in huge costs to the users and society. The drug crosses the blood-brain barrier and agonizes mu-opioid receptors (MORs) which results in heroin-induced euphoria.  Heroin abuse may result in an neuropsychiatric disorder known as opioid use disorder. Various pharmacological interventions for heroin have been developed which have been shown to be effective however they are costly and have negative side-effects.

Vaccines have been effective in controlling and eliminating infectious diseases such as polio and small-pox. Translating this to a non-infectious disease was the goal of the researchers led by Kim Janda. The team designed a therapeutic heroin conjugate vaccine behind principle elements including a B-cell epitope of the drug known as a hapten, the structure of the heroin drug and an immunogenic carrier protein (a T cell epitope), in this case tetanus toxoid. This hapten-protein conjugate vaccine was then formulated with different adjuvants to increase the immune response against the immunogen.

The efficacy of the vaccine was tested in both mice and monkey models. Immunization reduced heroin potency in mice by more than 15-fold. Immunization of monkeys resulted in durable anti-heroin IgG antibodies which persisted for over 8 months. The antibodies generated from immunization had high affinity to the key heroin metabolite and were not cross-reactive with clinically-used opioids. The vaccinated monkeys were challenged with heroin over a period of 6 months and the researchers found that the anti-heroin antibodies attenuated the heroin potency by more than 4-fold.

Altogether, this study shows that this candidate therapeutic heroin vaccine may be effective in treating heroin-related substance-abuse. The vaccine works by blocking the heroin “high”. One would need extremely high doses to achieve euphoria and the researchers believe that this may eliminate the need for recovering addicts to go back to drug use. The vaccine would be at a lower cost than current pharmacotherapy and could potentially have less adverse effects.