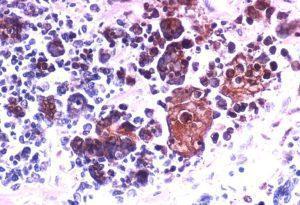 Using viruses to kill cancer cells is not a new concept. In this Nature Medicine News feature, Shraddha Chakradhar reviews the latest developments in this field and describes the progress that has been made so far.  Early studies using viruses to kill cancer were targeted at Hodgkin’s lymphoma and used Hepatitis B virus. Adenovirus was also used to target cervical cancer cells. Unfortunately, early clinical trials have been disappointing. In one study, 22 people were given an unmodified version of Hepatitis B viruses and as a result 13 developed viral hepatitis. The virus used here infected normal cells too which caused the virus to infect and cause disease. Therefore, there is a need to develop viruses which specifically target cancer cells.

When viruses enters tumour cells, they replicate in an unchecked manner, resulting in the bursting of the tumor cells. The principle of using a virus to target cancer is that tumours usually have weak immune defenses targeted at pathogens such as viruses because tumours release less interferon. For cancer-killing virus therapy to be successful, the virus must not be easily recognized by the immune system to allow it to replicate effectively in the tumour host.

One of the first studies to be published on these viruses was by a team of researchers from PsiOxus Therapeutics. The scientists used a metastatic cancer mouse model and injected these mice with a cancer-killing virus developed by the company. After more than three weeks post-injection, the diseased tissue was almost completely clear. The mice who had virus administered to them lived two times longer than the control mice.  Bristol-Myers Squibb (BMS) are now planning to conduct clinical trials to see its effect in human patients.

With recent technologies, developing oncolytic (cancer-specific) viruses that target multiple tumours is the next big step in this field of research. Very few of these viruses are currently on the market however. One of these viruses is a modified version of herpes simplex virus (HSV)-type 1 which has been approved for melanoma cases. The virus is tumour specific because of an ICP34.5 gene knock-out. Removing this gene decreases the ability of the virus to replicate in non-cancerous cells. However, this virus can only be  administered by injection which causes a problem for metastatic cancer where one may not know all the sites affected by the cancer. Another disadvantage of HSV is that it may be easily eliminated by the immune system as most people have a memory response towards it due to prior infection.

The use of a virus that is not pathogenic to humans may be the answer to reducing the immune response towards the virus. Studies have identified such viruses such as Maraba vesiculovirus which is part of the rhabdovirus group of viruses. In normal cells these viruses will be killed by interferon responses but since cancer cells do not secrete interferon at a high rate, the viruses can survive and replicate there.

In summary, cancer-killing viruses have tremendous potential to be used in cancer therapy. More research is needed however to further optimize their specificity and to ensure they are not eliminated from the body by the immune system before they can eliminate the tumour cells.