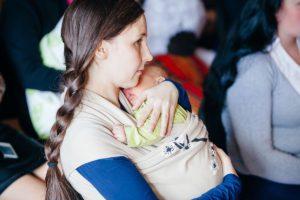 Breastfeeding is commonly praised for its benefits to the child. In addition to its ideal nutritional composition, breast milk is also known for its immunological benefits. Breastfeeding transfers the maternal microbiome and antibodies to the baby, resulting in reduced infection, diarrhoea, allergy, and asthma. Maternal antibody transfer from breast milk immediately modulates infantile immunity. Breastfeeding has been shown to influence the gut microbiome of the infant. A breastfed child will often have a healthier gut microbiome consisting of high microbial diversity. It is theorized that the abundance of prebiotic structures found in breast milk nourish healthy microbes within the gut, along with the direct addition of health-compatible microbial species.

Observational studies have not yet come to a consensus of the effect of breastfeeding on asthma severity. Ahmadizar et al. claim that this may be due to variations in study population selection or design. A protective effect has not yet been shown in cohort studies. Researchers from the Netherlands assessed the relationship between breastfeeding and asthma severity – specifically asthma exacerbations and poor asthma control. Data was obtained from the PACMAN cohort, a study comprising of nearly 1 000 asthmatic children recording asthma, medication use, and demographic factors. Children aged 4 to 12 years were evaluated. Through a cross-sectional questionnaire, breastfeeding status was recorded as ‘ever’ or ‘never’, then fewer than six months or greater than six months. Asthma exacerbations were considered the prescribed use of oral corticosteroids or emergency department visits related to asthma.

Overall, breastfeeding was found to be associated with a decreased risk of asthma attacks. Breast milk has unique microbiota that may positive influence the gut and respiratory microbiome of the infant, where asthmatic infants tend to have dysbiosis. This article supports the immunological notion that breastfeeding can benefit infants.