Application for CRISPR in muscular dystrophy 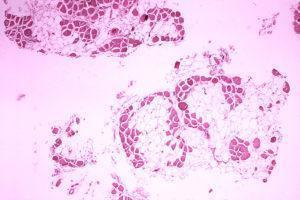 CRISPR technology has taken the scientific world by storm and has introduced a wide array of possibilities for using gene editing in therapeutic applications. The most commonly known platform is CRISPR-Cas9 but scientists from the University of Texas Southwestern Medical Center have recently used a more recent system known as CRISPR-Cpf1. They have shown that this platform was able to reverse muscular dystrophy mutations in both mouse and human models.

CRISPR-Cpf1 using an alternative enzyme to Cas9 in the traditional CRISPR system.  Cas9 is needed to cut DNA at specific sites. In this new method, a protein known as Cpf1 is used instead of Cas9. Cpf1 is naturally found in certain bacteria which use CRISPR in their own immune defenses.

While Cas9 needs two RNA molecules to guide it to a specific DNA region, Cpf1 only needs one RNA molecule. Another advantage of using Cpf1 is that it can cut the DNA in a way that results in the formation of sticky ends which can help in the insertion of new DNA, unlike Cas9 cutting which results in blunt ends.

Researchers, led by Eric Olson, investigated whether the CRISPR-Cpf1 system would be able to correct Duchenne muscular dystrophy (DMD) mutations in stem cells derived from humans with the condition and in a mouse model of DMD known as mdx mice.

In the mouse models, they found that CRISPR-Cpf1 technology was able to correct pathophysiological traits of DMD in the mdx mice.

This study, therefore, is a proof of concept that CRISPR-Cpf1 may be useful in treating individuals with muscular dystrophy.