Antibody that can control HIV replication 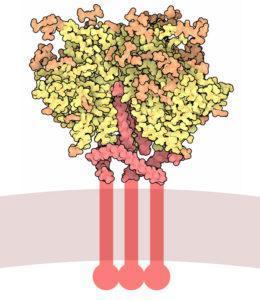 HIV broadly neutralizing antibodies (bnAbs) have mainly been studied for their use in an HIV vaccine, however, these antibodies may be effective in controlling the viral load of individuals who are HIV-infected. This study shows that one monoclonal antibody, 10-1074, is able to suppress viremia in participants infected with HIV. This antibody may be useful in treatments of the virus.

BnAbs are antibodies that usually undergo extensive somatic hypermutation enabling them to bind to various subtypes of HIV and inhibit viral entry into cells. Studies have shown that cocktails of bnAbs are able suppress viral replication in HIV-infected individuals who are not on antiretroviral treatment (ART).

Researchers from The Rockefeller University, led by Florian Klein, investigated whether the use of a single antibody known as 10-1074 would be able to suppress viremia in the absence of escape variants in a cohort of HIV-infected participants.

10-1074 is a bnAb that targets glycans at the base of the V3 loop. This antibody was able to neutralize 61% of a 306-virus panel consisting of HIV strains from 13 different subtypes. It had an 80% inhibitory concentration of 0.18ug/ml which means it neutralizes in a very potent manner.

First, the scientists tested whether administration of 10-1074 was safe. They recruited HIV-uninfected and infected participants and gave them a single dose of 10-1074. No adverse effects were observed over the 168 day follow up period.

Unfortunately, weeks after antibody infusion, participants experienced viral rebound. This was caused by the viruses escaping 10-1074 neutralization by mutating at the antibody epitope on the virus. However, these escape mutants were still sensitive to CD4-binding site antibodies.

Together, these results highlight the use of a single antibody to control viral replication in HIV-infected individuals. Since HIV easily escapes neutralization of a single antibody, a more effective treatment strategy may be to use a combination of monoclonal antibodies that target different sites on the HIV Envelope glycoprotein.