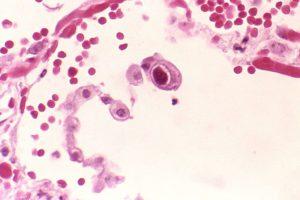 Human cytomegalovirus (HCMV) is a cause of major concern as it causes severe disease in immunocompromised individuals. Therefore, a vaccine to prevent the virus may be important to control and eventually eradicate it. Researchers, led by Michael Mach, have found that both non-neutralizing and neutralizing antibodies are able to prevent infection in immunodeficient hosts. These researchers provide insight which may be useful in the design of an effective vaccine towards HCMV.

HCMV is a ubiquitous virus that is found in all geographic locations and among all socio-economic groups. It is one of the leading causes of childhood hearing loss and mental retardation. HCMV infection usually persists for life, with periodic reactivation. The infection is well controlled in most people, however, it can cause severe disease and death in individuals with compromised immune systems and in newborns. The virus has also been shown to contribute to graft dysfunction after transplantation.

A vaccine to prevent this disease may aid in preventing at-risk groups from developing severe disease.However, the components of the immune system which elicit protective immunity against the virus were not well understood. Therefore, the researchers in this study investigated what the role of both neutralizing and non-neutralizing antibodies towards the HCMV glycoprotein was in the prevention of HCMV infection.

In summary, the researchers have shown the potential of protecting individuals from HCMV by using both non-neutralizing and neutralizing antibodies. Development of an immunogen to elicit these responses in humans may be essential as relying on passive immunization may not be enough to control the virus.