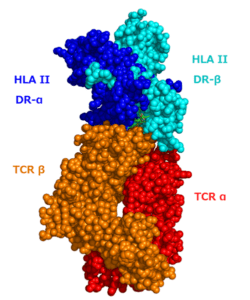 Researchers have found that potent, broadly neutralizing antibodies against HIV can be used to make virus-specific chimeric antigen receptor (CAR) T cells that are capable of killing HIV-infected cells.

CARs are engineered T cells that produce T cell receptors that specifically target virus- or tumour protein-containing cells. Their advantage over normal T cell receptors (TCRs) is that they are MHC unrestricted and therefore the same CARs can be used by different individuals. This also means that the process of tumour cell evasion caused by MHC downregulation does not affect CARs.

The use of CARs has been well documented in cancer research and many promising clinical trials have been conducted. CARs are made first identifying antibodies that are able to bind to a tumour cell surface antigen. Once identified, a single chain version of the antibody would be made which would act as an TCR by fusing it with one of the CD3 chain signalling domains.

In terms of HIV research, the earliest attempts of killing HIV-infected cells using CARS in the 1990s were unsuccessful and therefore focus shifted to other methods for HIV treatment. Since that time, numerous monoclonal antibodies which target HIV have been identified and therefore the researchers from the University of California Los Angeles, led by Otto Yang, generated CARs based on 7 anti-HIV antibodies.

The researchers used sequences from 7 monoclonal antibodies that bind potently to the HIV Envelope to engineer single-chain versions to be used as CAR TCRs. Each of the 7 CARs expressed in the right conformation and were able to transduce primary CD8 T cells which proliferated as a response to HIV-infected cells. The CARs were able to mediate killing of HIV-infected cells and the antiviral activity was potent for all 7 CARs. However, the antiviral activity of these CARs varied from strain to strain.

This study shows that HIV antibody-based CARs are able to efficiently kill HIV-infected cells. The next step of the study would be to take these in vitro results and test if they are reproducible in humans.