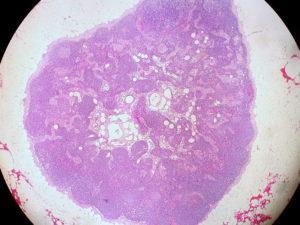 The fate of naïve T cells which develop in the thymus has not been fully understood in humans, especially the mechanism behind their persistence throughout life.  Researchers from the Columbia University Medical Center, New York, led by Donna Farber, recently investigated how naïve T cells are maintained throughout life in the primary and secondary lymphoid tissues.

Naïve T cells are crucial in the immune response against novel antigens. They  are produced in the thymus, largely during the early years of life. By the beginning of puberty, the thymic functions reduce drastically. The mechanism of how and where naïve T cells are maintained throughout human life was previously unknown.

The researchers obtained human donor tissues from various lymphoid tissues including the thymus, lymph nodes and the spleen. Using these samples there were able to characterize the different cell populations. Studies like this have previously been performed in animal models but this is the first study to be performed using various human tissues. Another advantage the researchers had was that they obtained samples from donors of different ages. The ages of their donors ranged from 2 months to 73 years old, which allowed the researchers to get a good picture of how T cell populations change over time.

Naïve T cells produced from the thymus can be differentiated from other T cells due to the presence of extrachromosomal DNA. As the cells divide, this DNA gets diluted out. The researchers used this characteristic as a marker for naïve T cells.

Interestingly, the researchers discovered that different clonal populations of these naïve T cells were compartmentalized in the different organs. There was very little cross-over between the compartments. Numerous naïve T cells circulate around the body in early life but this could be due to the cells being in transit to their final destination of their respective lymphoid organs.

The next step of the study would be to understand why the naïve T cells compartmentalize and how they stay in their compartments. This study reveals that naïve T cells persist throughout life in different lymphoid organs, with each site having unique T cell clonal populations.