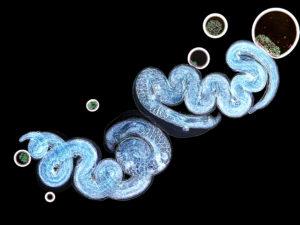 Toll-like receptors (TLRs) are an integral part of the innate immune system. They are trans-membrane proteins which are able to identify pathogenic molecules. There are very few types of TLRs but they are able to detect a wide amount of dangerous micro-organisms. Toll-deficient mutants are not able to fight off infection as efficiently.

TLRs are well characterized in humans and in insects but little is known about their role in nematode immunity. Researchers from NYU Langone Medical Center, Julia Brandt and Niels Ringstad, looked at the TLR pathway in C. elegans – a non-parastic soil nematode. C. elegans only has one TLR, TOL-1, and it has not been implicated in pathways similar to those of mammals and insects. TOL-1 has previously been found to cause a behavioural response in C. elegans but the mechanism behind this was unknown.

The researchers found that TOL-1 is required to promote the growth of certain neurons in C. elegans known as BAG neurons to avoid Serratia marcescens – a pathogenic microbe. These neurons are gas-sensitive and detect carbon dioxide which aids in the avoidance of the pathogen as carbon dioxide along with other substances are a signal of the presence of microbes. TOL-1 deficient mice were less likely to remove themselves from a pathogen-infested area, most likely because they could not sense the danger due to the lack of the TLR.

Altogether, these data reveal that TLRs are important in nematode immunity. TOL-1 in nematodes helps the organisms avoid pathogens by detecting the carbon dioxide which the pathogens produce. This data helps in the understanding of the defensive behavioural response nematodes have towards their pathogens.