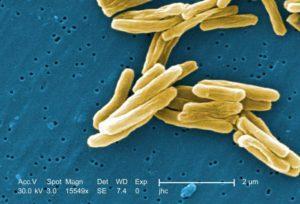 Researchers from John Hopkins University may have found a novel target for tuberculosis (TB) therapy. The team, led by Gyanu Lamichhane, investigated an important TB enzyme known as LD-transpeptidase which is crucial for the production of maintenance of the bacterial cell wall of Mycobacterium tuberculosis (Mtb).  Developing a drug that targets an enzyme that is important for the function of the bacterium may help in minimizing drug-resistance.

The researchers crystallized LD-transpeptidase enzymes from different bacterial species and analyzed their structures at the molecular level. Using modelling with the resolved structures the scientists were able to design compounds in the beta-lactam class of antibodies that bound to the enzymes and inhibited their activity.

The next step of this research will be to modify the compounds so that they only kill pathogenic bacteria while leaving the good bacteria, such as gut commensal bacteria, unaffected.  However, the current compounds tested in this study will still go into the early stages of clinical trials.

New compounds that target at a critical Mtb enzyme have been identified by the researchers. These compounds could aid in the treatment of drug-resistant TB and may be compounds which the bacterium may not be able to easily become resistant to as changes in the enzyme sequence and structure could interfere with the survival of the bacterium.