Insights into how hemolysis leads to susceptibility to infection 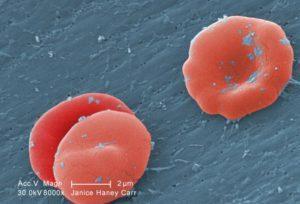 Hemolysis is a condition which affects people with diseases such as malaria, sepsis and sickle cell anaemia. Heme is the component of hemoglobin which carries iron and facilates in the transport of oxygen around the body. Hemolysis causes the release of heme from hemoglobin leading to oxygen depravation of the body.

Free heme is left to circulate in the body which has been associated with increased susceptibility to pathogens. Mouse studies have shown that free heme can lead to increased disease severity and organ failure in a sepsis disease model. It has been previously proposed that the free heme-iron is taken up by the pathogens for nutrition.

Researchers from the University of Vienna, led by Slyvia Knapp, further investigated the mechanisms behind increased susceptibity to disease due to hemolysis. To do this, they used a mouse model of sepsis caused by gram-negative bacteria.

Interestingly, they found that the susceptibility to disease and the inability to control infection was not dependent on the pathogens taking up the heme-iron. The free heme effectively inhibited phagocytosis by macrophages which led to a lower immune response and therefore, the mice had less ability to control the infection.

The authors found that use of quinine as treatment was able to prevent heme from affecting the cytoskeleton, thus restoring immune function and providing a better prognosis. This research gives insight into the mechanism behind hemolysis causing susceptibility to infection. The data may be used to further investigate how to prevent hemolysis and what drugs may be useful in humans.