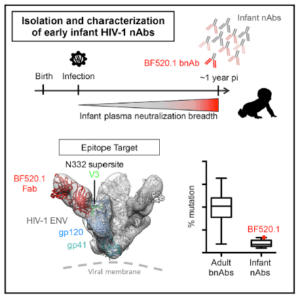 Broadly neutralizing antibodies (bnAbs) that target HIV have been studied extensively for their use in an HIV vaccine. To better understand how easy it will be for vaccinees to elicit bnAbs, researchers study the development and characteristics of these antibodies in natural infection. In adults, it has been found that bnAbs develop on average 2-3 years post infection. These antibodies have usually undergone extensive somatic hypermutation. This is a disadvantage of bnAbs in terms of an HIV vaccine as somatic hypermutation is a lengthy process but a vaccine should preferably protect the vaccinee in a short time period.

Little was known about how quickly bnAbs develop in children until a study led be Julie Overbaugh and colleagues in Nature Medicine, 2014 showed that the immune systems of HIV-infected infants were functional enough to develop bnAbs and that the occurrence of these antibodies in early life was as common as their occurrence in HIV-infected adults.

In a current study by the same group, the researchers aimed to determine whether infant bnAbs require the same amount of somatic hypermutation as bnAbs obtained from adults. The team isolated 10 antibodies from an infant who had been infected for approximately one year. From the 10 antibodies they isolated, one had cross-clade activity and therefore was termed a bnAb.

They first wanted to identify where this bnAb bound on the HIV Envelope and they discovered that it targeted the N332 supersite in the V3 region. This antibody was heavily glycan-dependent. They then went on to look at the levels of somatic mutation in the infant’s bnAb. Interestingly, they found that although the antibody had broadly neutralizing activity, it had less somatic hypermutation than adult bnAbs and poor neutralizing antibodies from adults.

In summary, the researchers were able to investigate the properties of an infant bnAb and observe that breadth may not be fully dependent on the level of somatic hypermutation of an antibody. These results shed light on the route antibodies may take to breadth and highlights the fact that a vaccine may be able to trigger bnAbs that do not have to undergo somatic hypermutation and therefore provide protection in a shorter time period.