ICI 2016 – The role of complement in fighting malaria in pregnancy

Infection by malaria parasites during pregnancy is a major health concern as it puts both the mother and foetus at risk. Some of the complications that could occur during malaria in pregnancy (MiP) include reduced maternal health (eg. anaemia), premature delivery, low birth weight of the baby and even spontaneous abortion. MiP manifests when red bloods infected with malaria parasites such as Plasmodium falciparum accumulate on the placenta.

As a woman has successive pregnancies, MiP is less prevalent due to the acquisition of a level of immunity against the parasite. Antibodies against parasitic antigens are already present to mediate sequestration of infected red blood cells. Antibody responses are predominantly IgG1 and IgG3, which would suggest that complement may be playing a role in the immune response against malaria. However, this has not been fully defined. 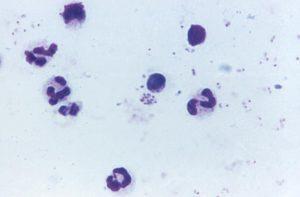 Researchers at the Burnet Institute, Australia set out to understand the role of complement in anti-malaria antibody mediated immunity. As presented at the International Congress of Immunology (ICI) 2016, they collected sera from a cohort of 350 pregnant women from Papua New Guinea, in a region that is malaria-endemic. They found that the antibodies from these participants promoted the deposition of complement to the surface of infected red blood cells which had bound to the placenta. The mechanism of action of this complement deposition was through the protein complex C1p and complement activation led to the fixation of the C3b complement element.

The fixation of complement did not lead to cell lysis or parasite killing, however, antibodies with complement were able to inhibit attachment of the infected red blood cells to the placenta and also enhance phagocytosis through monocytes. The group also identified the malaria antigen PfEMP1 as the target of these complement-fixing antibodies.

This study shows that complement does play a role in protecting the host from placental malaria infection. These findings may aid in the development of an effective vaccine against malaria as they provide novel insights into the mechanisms of antibody-mediated immunity and the role of complement in MiP.