ICI 2016 – Parasitic worms in the treatment of chronic asthma 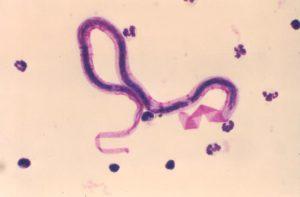 Chronic asthma is a condition characterised by persistent lung inflammation, shortness of breath, wheezing and coughing. It can also lead to the remodelling of the airways. Despite the fact that steroids are usually used to treat the condition; it still persists in affected individuals.

There has been an increase in the incidence of chronic asthma in the developed world but a similar increase has not been noted in developing countries. This has led scientists in the field to hypothesize that helminth infection may be playing a role in protecting individuals in the developing world from getting asthma.

Researchers at the University of Strathclyde, United Kingdom presented their findings at the International Congress of Immunology (ICI) 2016 on the parasitic worm-derived immunomodulator ES-62 and its role as a protective agent against chronic asthma.

Previously they have shown that ES-62 is able to protect mice with acute asthma against airway hyper-responsiveness as well as inflammation. To add to these findings they have now found that ES-62 can also prevent cellular infiltration of the lungs by immune cells such as neutrophils and mast cells. They also found that this immunomodulator is able to prevent mucus production and airway thickening in mice with chronic asthma. The mechanism of action seems to be associated with increased levels of IL-10-producing regulatory B cells.

Importantly, ES-62 is still beneficial even after the airways have been remodelled. ES-62 is able to stop pathogenesis and decrease inflammatory flares. Two drug-like analogues of ES-62 have been manufactured and they both mimic the therapeutic attributes of the immunomodulator.

These researchers have found an immunomodulator derived from parasitic worms that may be translated into a novel class of drugs to help combat the problem of chronic asthma.