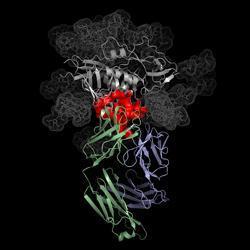 The development of a successful HIV vaccine may require the induction of broadly neutralizing antibodies. Understanding how HIV can be recognized by antibodies may aid in the design of effective immunogens to be used in prophylactic and/or therapeutic vaccines.

There are currently a number of trials which are planned or already underway which utilize antibodies against HIV subtype C. For example, a phase IIb trial using CD4-binding site specific monoclonal antibody VRCO1 as well as a phase III trial using a modified version of the Thailand RV144 vaccine trial immunogen which has been adapted to the subtype C strain.

Researchers from the University of Cape Town, led by Carolyn Williamson, investigated the genotypic and neutralization features of early-transmitted HIV subtype C strains and how these features affect antibody recognition.

The team used a panel of 200 HIV pseudoviruses which they generated from acute infection (within 100 days of infections). They found that most of the viruses they got were classified as Tier 2 viruses, meaning they are moderately neutralization resistant. The viruses which were collected at a very early stage of infection, pre-seroconversion, were more resistant to neutralization by sera as opposed to viruses collected post-serconversion.

The study was conducted over a period of 13 years and it was found that over time the viruses became more resistant to neutralization by 3 broadly neutralizing antibodies, each targeting a different site on the HIV Envelope.

This study provides a better understanding of the features which affect antibody recognition in subtype C viruses. These viruses are a good representation of the subtype C epidemic in Southern Africa which is the region most affected by HIV/AIDS. These data may aid in the successful design of an effective HIV vaccine.