The role of Cas1 and 2 proteins and immunity 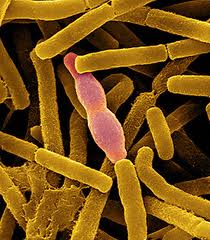 Bacteria are under constant attack from foreign genetic elements. Protection from these invaders comes in the form of the CRISPR-Cas immune system. Their function is preventative, so that when bacteria encounter foreign DNA, the CRISPR-Cas system creates DNA fragments or “spacers” that match the sequences of the invading foreign DNA and are inserted into the microbe’s genome. In this way the next time the organism encounters this foreign element, it can quickly recognize it and defend against it through an RNA interference–like mechanism. Researchers from this study were able to analyze the crystal structures involved and in this way were able to uncover the specific functions of the enzymes Cas1 and Cas2. Together they act as a complex, facilitating bacteria to acquire DNA spacers and insert them correctly into the host genome.