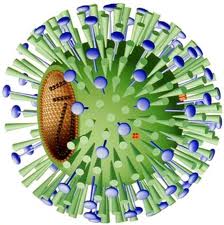 The immune system’s response to most viral infections, including influenza, is to kill and remove the pathogen. Eliminating infected cells rids the body of the infection. This murine study reports that a special type of epithelial cell in the lungs of mice—called club cells—survive influenza infection. Gene expression analysis of these cells suggests that club cells express high amounts of antiviral genes in response to infection. This will help the mouse contain the virus during early infection, however, club cells were also shown to produce pro-inflammatory molecules that resulted in lung pathology due to sustained respiratory tract inflammation following viral clearance. They thus concluded that club cells could likely play a role in inflammation-induced mortality, as seen in the H5N1 and H1N1 influenza pandemics. The study also indicated that a better understanding of the contribution of club cells to persistent respiratory tract inflammation following virus clearance may help with the development of new strategies to treat the sequelae of influenza infection.