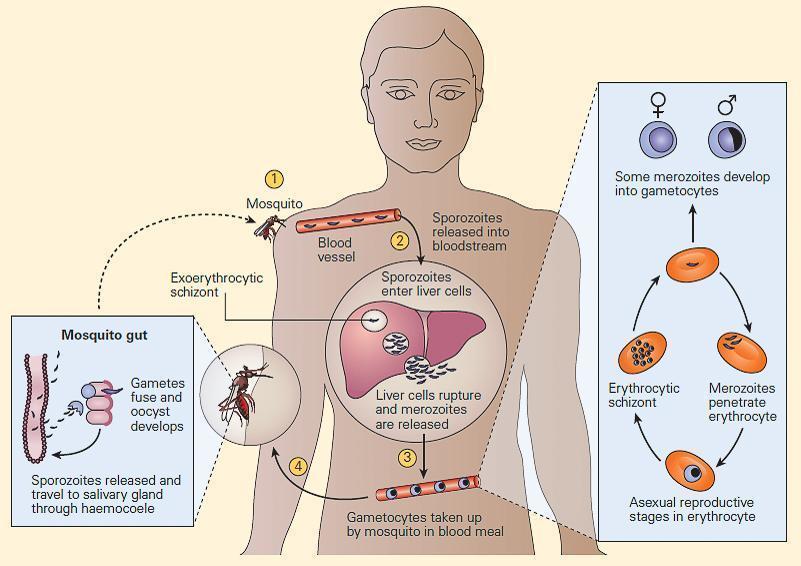 Figure 1. The life cycle of Plasmodium falciparum in the human host and mosquito vector. The mosquito injects sporozoites into the host (1), which are carried through the blood to the liver (2), where they invade hepatocytes and undergo a process of asexual (mitotic) replication to give rise to an exoerythrocytic schizont. Up to this point, the infection is nonpathogenic and clinically silent. After about seven days, the liver schizonts rupture to release many thousands of merozoites into the blood (3). Each merozoite invades an erythrocyte and divides mitotically to form an erythrocytic schizont containing up to 20 daughter merozoites (right, inset). These merozoites can reinfect fresh erythrocytes, giving rise to a cyclical blood-stage infection with a periodicity of 48 to 72 hours, depending on the Plasmodium species. As-yetunknown factors trigger a subset of developing merozoites to differentiate into male and female gametocytes, which, when taken up by a feeding mosquito, give rise to extracellular gametes (4). In the mosquito mid-gut, the gametes fuse to form a motile zygote (ookinete), which penetrates the mid-gut wall and forms an oocyst, within which meiosis takes place and haploid sporozoites develop (left, inset). (Reproduced with permission from Stevenson MM, Riley EM. Innate immunity to malaria. Nat Rev Immunol. 2004;4:169-80.) [Reproduced with permission from Bellanti, JA (Ed). Immunology IV: Clinical Applications in Health and Disease. I Care Press, Bethesda, MD, 2012].