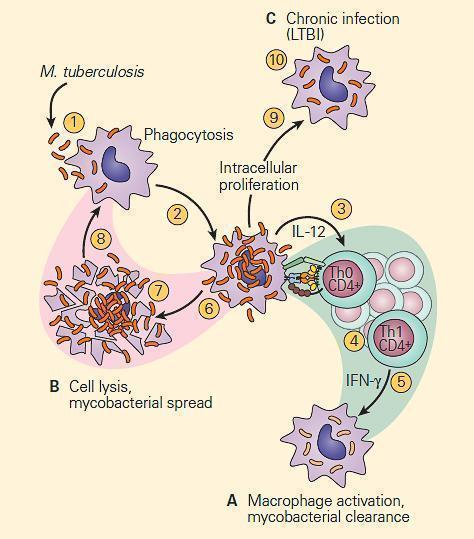 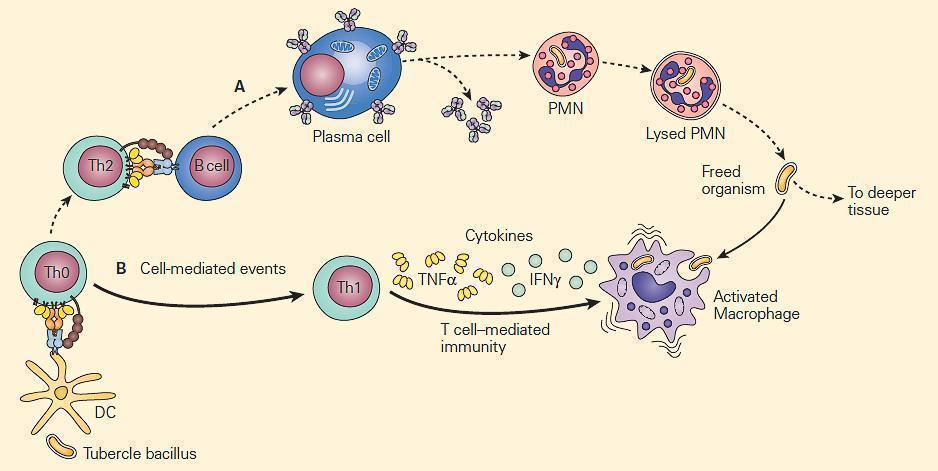 Figure 2. Schematic representation of the relative roles of antibody and cell-mediated events in the enhancement of phagocytosis during chronic bacterial infections. Panel A: PMNs show limited microbicidal activity. Panel B: The major cellular response in chronic infection is carried out through cytokine-induced stimulation of macrophages by TNF-α and IFN-γ. [Reproduced with permission from Bellanti, JA (Ed). Immunology IV: Clinical Applications in Health and Disease. I Care Press, Bethesda, MD, 2012]. 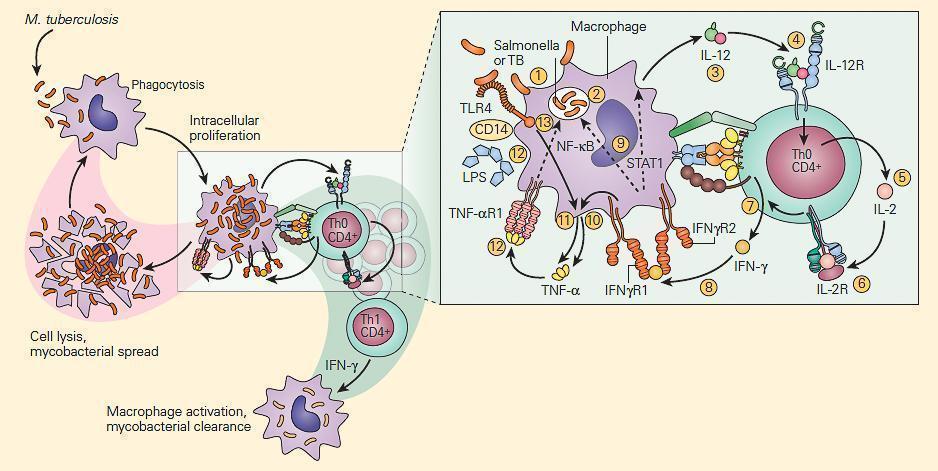 Figure 3. Schematic representation of the IL-12/IFN-γ pathway illustrating various activation pathways associated with the killing of intracellular bacterial organisms such as M. tuberculosis (TB) and Salmonella. Following the uptake of the TB by the macrophage (1) into a phagosome (2), the macrophage is stimulated to produce IL-12 (3). The binding of IL-12 to its IL-12R on a Th CD4+ cell (4) induces the synthesis of IL-2 (5), and after autocrine binding of IL-2 to its IL-2R (6) leads to the synthesis of IFN-γ (7). The binding of IFN-γ to its receptor (8) activates both the STAT1 and NF-kB pathways (9) to kill the TB and to further enhance IL-12 production; the IFN-γ-activated macrophage (10) and TLR4 activation by the TB (11) induce TNF-α production that, after binding to its receptor (12), leads to further enhancement of intracellular killing of the TB (13). [Reproduced with permission from Bellanti, JA (Ed). Immunology IV: Clinical Applications in Health and Disease. I Care Press, Bethesda, MD, 2012]. 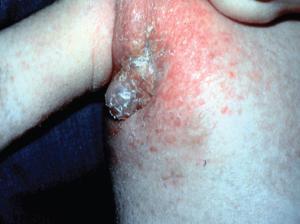 Figure 4. Photograph of an infant with complete IFN-gR1 deficiency who was vaccinated with BCG and who developed dissemination of the BGC (BCGosis) as a result of a defect of the IL-12/IFN-g pathway. The deficiency permitted the spread of the BCG infection to a regional lymph node with suppurative inflammation swelling and erythema in the right axilla. (Courtesy of Dr. Sergio Rosenzweig.) [Reproduced with permission from Bellanti, JA (Ed). Immunology IV: Clinical Applications in Health and Disease. I Care Press, Bethesda, MD, 2012]. 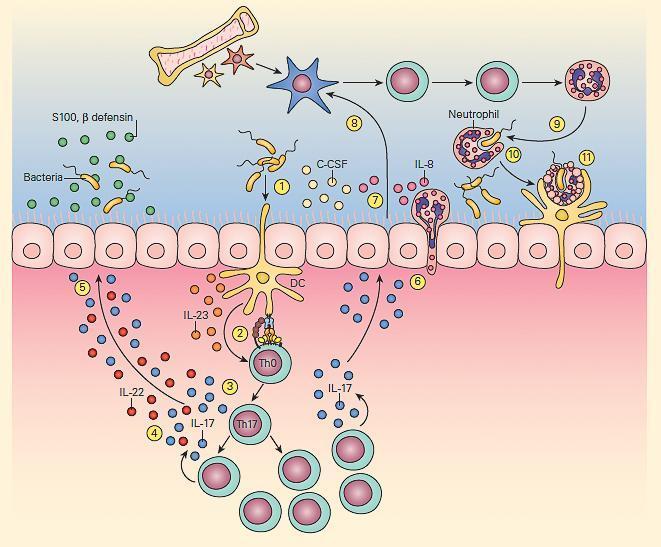 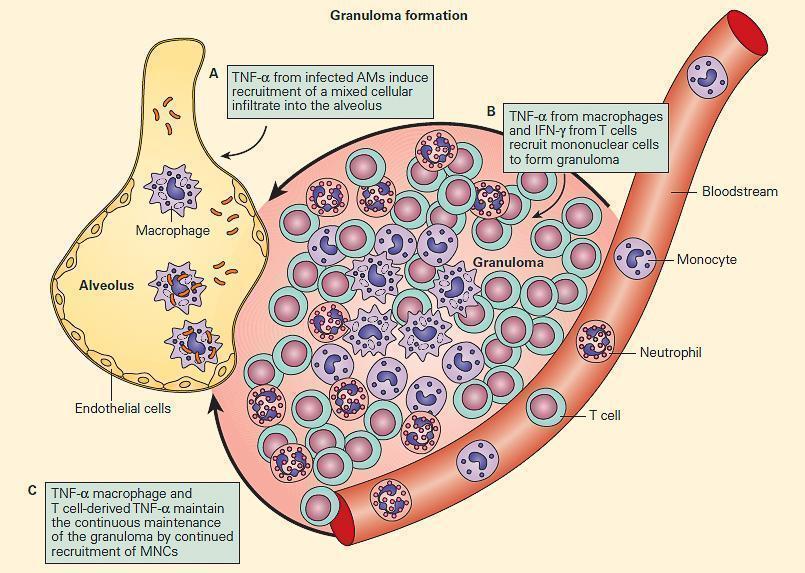 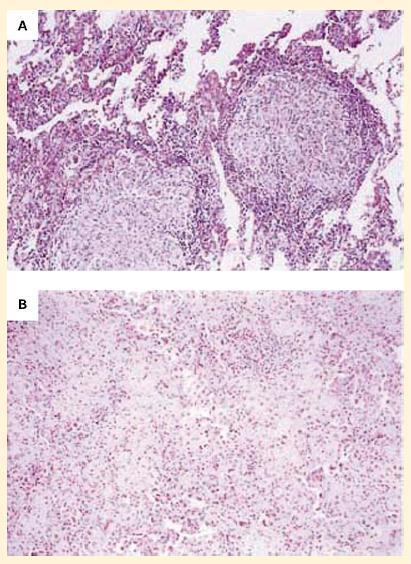 Figure 7. Panel A: Photomicrographs of lung specimens from a patient with tuberculosis and granuloma formation who did not receive infliximab. Panel B: A patient with tuberculosis with a breakdown of granuloma formation who received infliximab. The specimen from the patient who did not receive infliximab shows well-formed granulomas with negligible overt necrosis (panel A). The specimen of lung parenchyma from the patient who received infliximab shows prominent interstitial fibrosis and lymphoid inflammation without granulomas (panel B). (Reproduced with permission from Keane J, Gershon S, Wise RP, et al. Tuberculosis associated with infliximab, a tumor necrosis factor alpha-neutralizing agent. N Engl J Med. 2001;345:1098–104.) [Reproduced with permission from Bellanti, JA (Ed). Immunology IV: Clinical Applications in Health and Disease. I Care Press, Bethesda, MD, 2012].