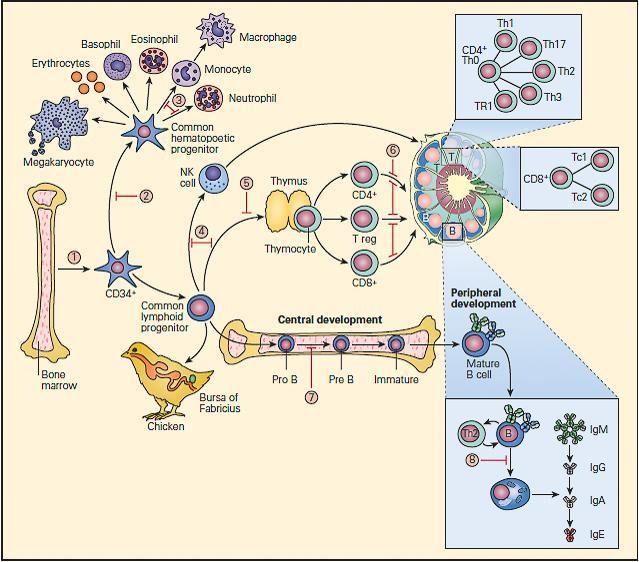 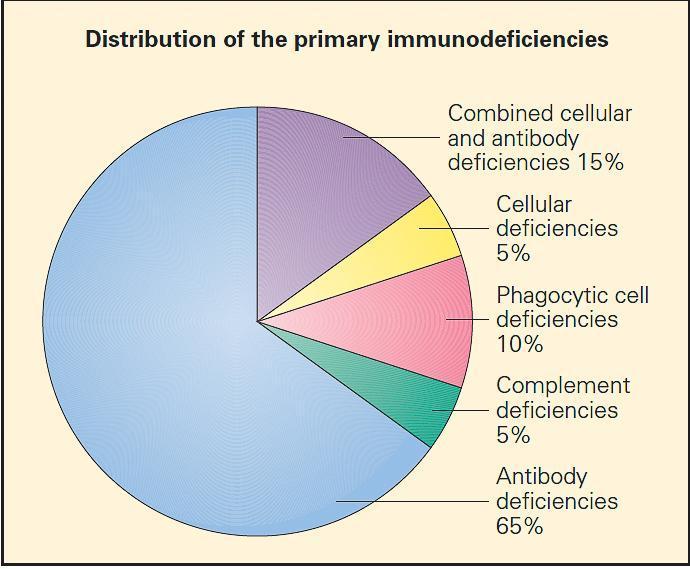 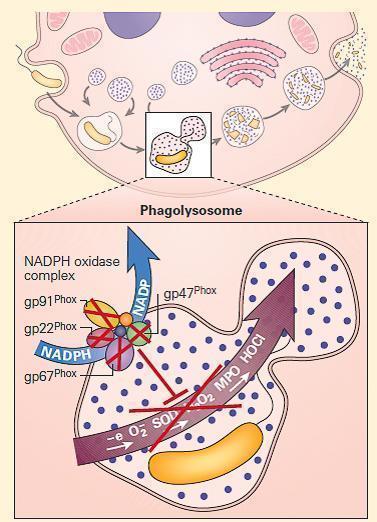 Figure 3. Schematic representation of a neutrophil in chronic granulomatous disease (CGD). The NADPH oxidase is assembled on either the wall of the phagolysosome, or the plasma membrane, depending on whether the invader has been engulfed or is too large to be ingested. After cellular activation the secondary granule fuses with the phagolysosome, embedding the cytochrome components in the wall of the vesicle. p47phox and p67phox become phosphorylated and tightly associated in the cytosol, followed by transit to the transmembrane cytochrome complex. When p40phox and RAC join the complex, the mature NADPH oxidase is formed, and is capable of harvesting an electron from NADPH, oxidizing it to NADP+ and delivers that electron to molecular oxygen in the phagosome, generating superoxide (O2-). Superoxide is converted to hydrogen peroxide (H2O2) by superoxide dismutase (SOD); this in turn is converted to hypohalous acid (HOCl or bleach) by myeloperoxidase (MPO). Mutations in the four structural genes of the NADPH oxidase (gp91phox, p22phox, p47phox, and p67phox) cause CGD. Gp91phox is X-linked recessive, while the others are autosomal recessive. [Reproduced with permission from Bellanti, JA (Ed). Immunology IV: Clinical Applications in Health and Disease. I Care Press, Bethesda, MD, 2012]. 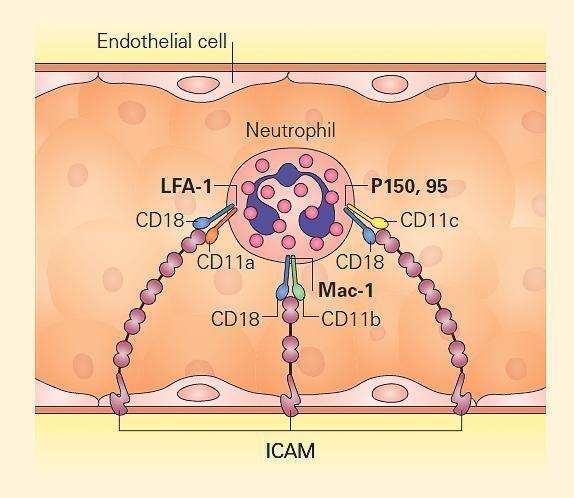 Figure 4. Leukocyte adhesion via integrins. Neutrophils attach to endothelium via PMN-surface receptors composed of heterodimeric CD18 molecules with their partners, CD11a, CD11b, and CD11c. These in turn bind to cell surface molecules on the endothelium, composed of the intercellular adhesion molecules (ICAM) 1 and 2. Mutation of CD18 leads to loss or impairment of all the heterodimers, disabling tight adhesion and vascular exit of neutrophils. Therefore, CD18 deficiency leads to leukocyte adhesion deficiency type I (LAD I). [Reproduced with permission from Bellanti, JA (Ed). Immunology IV: Clinical Applications in Health and Disease. I Care Press, Bethesda, MD, 2012].

Defects of the Innate Immune System 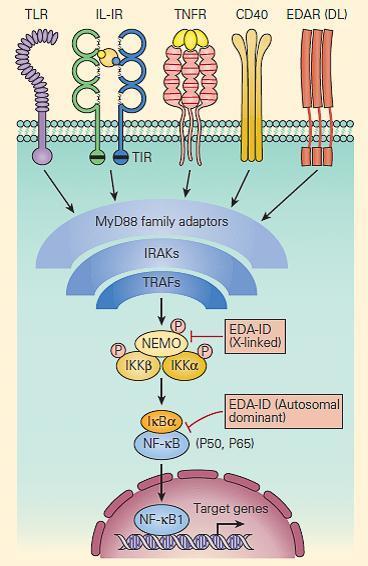 Figure 5. Schematic representation of NF-kB activation and NEMO deficiency. Signaling pathways, including those for ectodermal formation (EDA/DL) and inflammation (TNFR, IL1R, IL18R, CD40R, and TLR), all converge on the pathway needed to phosphorylate and ubiquitinate the inhibitor of NF-kB, i.e., IkBα. When this occurs appropriately it leads to liberation of the active p50/p65 NF-kB, which, after translocation to the nucleus, activates proinflammatory genes as well as genes responsible for skin and skeletal morphogenesis. Therefore, mutations in NEMO have the potential to impair both ectoderm formation and innate immunity. However, defective CD40 signaling also leads to impaired immunoglobulin class-switch recombination, in some cases, causing failure to switch from immunoglobulin M (IgM) to IgG, hence theoccurrence of hyper IgM in some patients. [Reproduced with permission from Bellanti, JA (Ed). Immunology IV: Clinical Applications in Health and Disease. I Care Press, Bethesda, MD, 2012]. 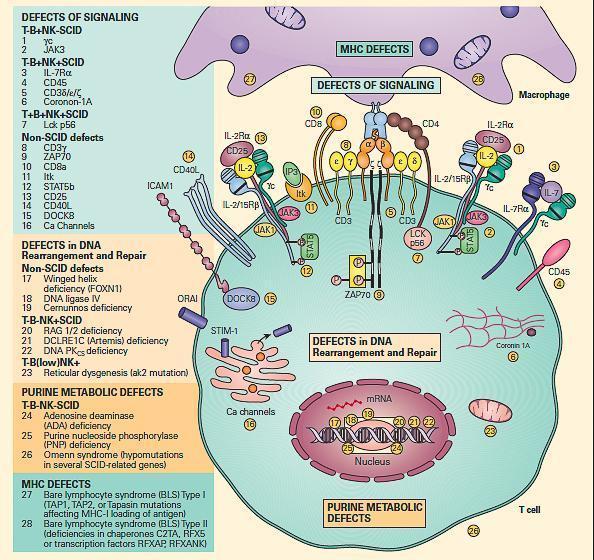 Figure 6. Schematic representation of the different levels at which defects of the combined T and B cell deficiencies occur divided according to the arbitrary classification. These include defects of signaling, defects in DNA rearrangement and repair, and purine metabolic defects. Shown on the right side of the figure are molecular defects seen in conditions presenting as the SCID phenotype arranged according to various combinations of involvement of T, B, and NK phenotypes. On the left side of the figure are shown other molecular defects seen in non-SCID phenotypes. [Reproduced with permission from Bellanti, JA (Ed). Immunology IV: Clinical Applications in Health and Disease. I Care Press, Bethesda, MD, 2012].

The Clinical Presentation of Patients with SCID

Defects of Cytokine and Signaling 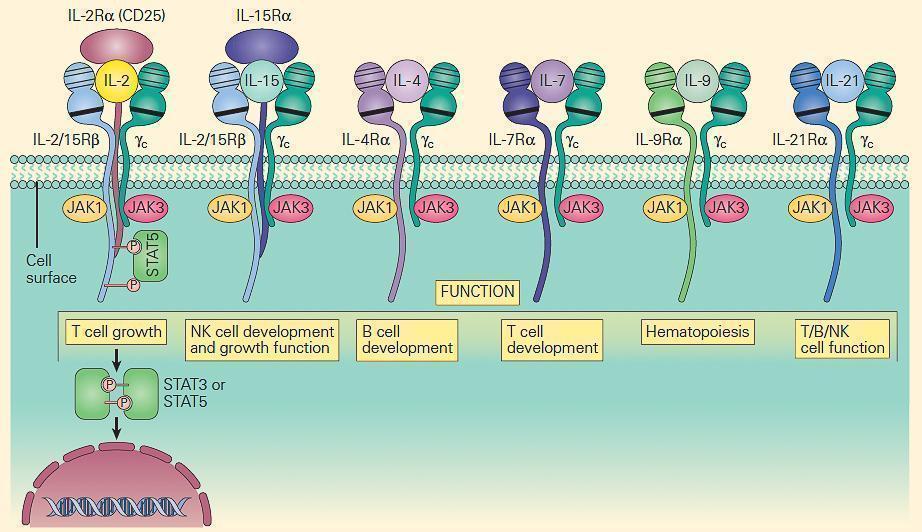 Figure 7. Schematic representation of the receptors that use the IL-2R common gamma chain (γc). Note that γc is linked to JAK3, and these receptors signal through STAT3 and STAT5. Therefore, mutations in γc, JAK3, and STAT5 have many overlapping features. Γc mutations exert part of their profound effect through their impact on receptors other than IL-2. [Reproduced with permission from Bellanti, JA (Ed). Immunology IV: Clinical Applications in Health and Disease. I Care Press, Bethesda, MD, 2012].

Defects in B Cells 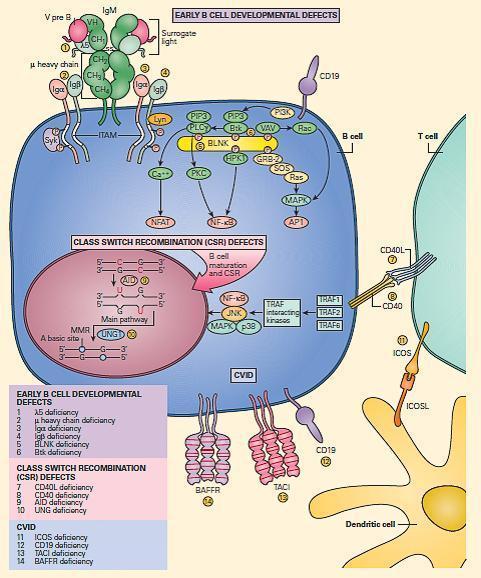 Defects in Early B Cell Development

B Cell Defects with Severe Reduction in All Serum Ig Isotypes with Absent B Cells: X-Linked Agammaglobulinemia (XLA) (MIM ID #300755)

Severe Reduction in Serum IgG and IgA with Normal/Elevated IgM and Normal Numbers of B Cells: The Hyper IgM Syndromes 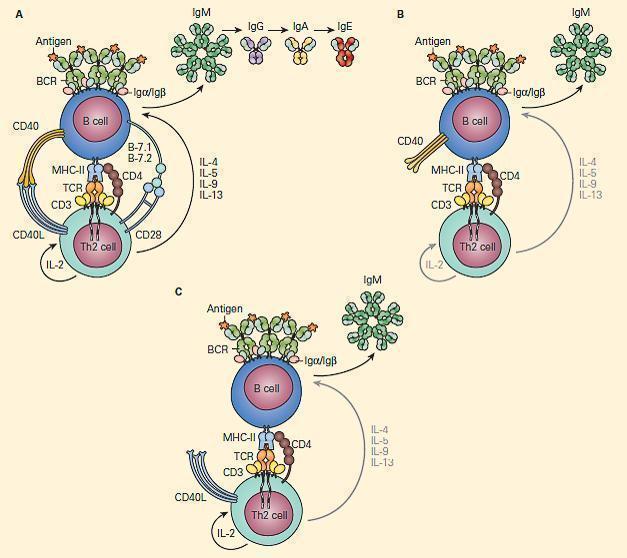 Figure 9. Schematic representation of the critical interaction of CD154 (CD40L) expression on the T cell with the CD40 on the B cell that is required for IgM/IgG class switching. Panel A: After cognate interaction of the MHC-II/peptide complex with the TCR of a CD4+T cell, CD40L activates CD40 to drive B cell immunoglobulin class switch from IgM to IgG (class-switch recombination, CSR), as well as subsequent maturation of antibody from IgM→IgG→IgA→IgE. Panel B: In the absence of CD40L, there is no CD40L/CD40 interaction, no class switch, and there occurs only synthesis of IgM. Panel C: Similarly, in the absence of CD40 and lack of binding with CD40L, there is no class switch and synthesis only of IgM. [Reproduced with permission from Bellanti, JA (Ed). Immunology IV: Clinical Applications in Health and Disease. I Care Press, Bethesda, MD, 2012].