GET OUR MONTHLY NEWSLETTER
Immunopaedia > Breaking News > Can some Tfh cells produce IFN-𝛾 ?

Can some Tfh cells produce IFN-𝛾 ? 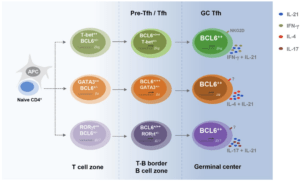 Model of IFN-γ–producing Tfh cell differentiation. In the T cell zone, once naive CD4 T cell is activated, T-bet is transiently expressed by a subset of BCL-6+/– cells. T-bet is then down-regulated by BCL-6 when it migrates into the B cell zone and GC and differentiates into mature Tfh cells. These ex–T-bet Tfh cells have the capability to produce IFN-γ in addition to IL-21 and highly express cell surface protein NKG2D. As a general hypothesis, transient induction of T-bet, GATA3, or RORγt during Tfh cell differentiation may determine the generation of IFN-γ–, IL-4–, or IL-17–producing Tfh cell subsets. However, generalization of this model requires future development of new genetic tools, including mouse strains carrying inducible Cre driven by the Gata3 or Rorc locus. (Source: Kaech 2018 JEM)

Tfh cells predominantly produce IL-21, however growing evidence suggests that these cells in vivo can also produce IFN-𝛾 (Th1) and IL-4 (Th2) cytokines. This suggests that the dogma of “one transcription factor, one cell type” may not always hold, and T helper subsets are more heterogenous than thought. Study by Fang et al., utilised “fate-mapping” mouse reporter strains to determine the transcription factor and functional kinetics of Tfh cells that are capable of producing IFN-𝛾.

They identified a population of Tfh CD4 T cells that previously expressed T-bet and produced IFN-𝛾, referred to as ex-T-bet Tfh. They showed that this cell population can be induced by vaccination, and the cells can be found in the germinal center. Expression of IFN-𝛾 by ex-T-bet Tfh was attributed to epigenetic reprogramming. Where T-bet remodels the chromatin at the CNS-35 region making the IFN-𝛾 locus accessible even in the absence of active T-bet expression. IFN-𝛾 expressing Tfh cells possessed distinct transcriptional profile from classical Tfh cells, suggesting that they are indeed a distinct population of IFN-𝛾+ Tfh cells.

In summary, Fang et al., demonstrated that early expression of T-bet is sufficient to epigenetically program Tfh cells to constitutively produce IFN-𝛾 even in the absence of T-bet. This finding has major implications, as it suggests that within the Tfh subsets there are subpopulations that are able at directing differential antibody generation depending on the additional cytokines they produce.