γδ T-cells are now recognized as one of the three major subsets of T-cells. Most of what is known, studied and documented on in the literature has been on their αβ T-cells. The number plus nature of the repertoire of antigenic targets for γδ T-cell receptors (TCRs) is still yet to expand, as this is an area that still needs to be studied even further.

In this paper, Wegrecki and colleagues sought to find out whether γδ T cells can recognise the human CD1a protein. The authors report that one of the reasons as to why this is important is because there is a limited understanding of the extent to which the CD1 family may represent ligands for γδ T cells. This has ideally led to close to zero reporting on the interactions between γδ TCRs and CD1a within the literature.

The authors were able to demonstrate, first and foremost, the existence of autoreactive γδ T cells that are specific for CD1a. These cells, however, were identified as being at a very low frequency within the peripheral blood of healthy individuals. 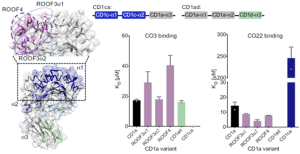 Figure 1: CD1a binds γδ TCRs in vitro; Figure on the left:” Engineered CD1a variants used to elucidate the binding determinants of the γδ TCRs. The side chains of mutated residues across the A’ roof (top) are shown in pink. The domain-swap chimeras (bottom) contain residues corresponding to human CD1c (CD1ca: navy blue) and human CD1d (CD1ad, light green). Light grey areas correspond to wild-type CD1a residues. The origin of the α domain in each construct is shown in the box diagram. Bar plots on the right: Dissociation constants of the binding between CO3 (left) or CO22 (right) γδ TCRs and wild-type CD1a (black), CD1a A’ roof mutants (pink), CD1ad (green), and CD1ca (navy blue) chimeric proteins were calculated from two independent experiments”.

The authors are confident that their work provides some fresh understanding into CD1a recognition by the γδ TCR recognition of CD1a and that this, along with newly discovered γδ TCR targets; CD1b and MR1, does bring about a question as to whether the ‘end to end’ mode of recognition used by αβ T cells does apply in any way to γδ T cells. They were also able to show that CD1a, that is normally considered an antigen presenting molecule, did not function to display lipid antigen to the TCRs. In line with this comes evidence of a mechanism for recognition of CD1a by the CO3 γδ TCR can be considered that does not represent lipid presentation. The authors in this paper referred to it as a sideways mechanism since it seems to function outside the normal ‘end to end’ mode of recognition used by αβ T cells.