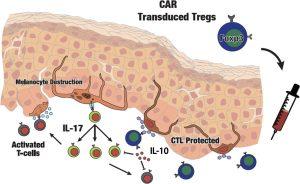 Vitiligo, autoimmune skin disease, causes psycho-social challenges individuals who have the disease. The hallmark of vitiligo immunopathology is the development of “white” patches of skin due to the destruction of melanocytes. Unfortunately, there no efficacious therapeutics against vitiligo, despite an improvement in immunopathogenesis.

Regulatory T cells (Tregs) play a huge role in peripheral tolerance and immune homeostasis via suppression of hyperactive immune cells, including self-reactive, cytotoxic T cells. Recent studies have shown that adoptive transfer of Tregs can contribute to improved local immunosuppression and contribute to slowing the rate of disease progression.  Tregs have been suggested as a potential vitiligo immunotherapeutic as the disease is associated with lower levels of Tregs.  In a recent study, Mukhataye et al., demonstrate the potential utility of antigen-specific Tregs in the control of vitiligo.

Ganglioside D3 (GD3) is over-expressed by perilesional epidermal cells, including melanocytes, thus, researchers hypothesised that induction of GD3 tolerance could contribute to reduced vitiligo pathogenesis. They utilised chimeric antigen receptor (CAR)- T cell therapy to generate GD3-reactive CAR-Tregs. Using in vitro models they showed that CAR-Tregs contribute to immuno-suppression of effector cells and protects against cell-mediated cytotoxicity of melanocytes. They also showed that CAR-Treg transfer to vitiligo-prone mice provided significant protection against depigmentation. Researchers did highlight limitations of their study which can be read in-depth in the main article. These data have promise for human application and could be a potential vitiligo immunotherapy.