In a new study published in Nature Communications, Launonen, et al., have identified and described the mechanism of how ovarian cancer hides from the body’s immune system. These findings have produced novel insights for the development of new targeted therapeutics against the devastating disease.

When tumour cells successfully evade the bodies immunes system, that is when cancer develops. Cancer immunotherapies, a therapeutic approach which is gaining much traction, is a promising therapy for treatment of multiple tumour types. However, ovarian cancer proves to be elusive against immunotherapy at this present moment.

In this present study, researchers made use of novel imaging technology, the to characterise more than 110,000 individual cells from clinical ovarian cancer samples. They looked at how the genetic characteristics of ovarian cancer influenced its effect on the human immune system, and how it influenced the interaction between immune and tumour cell types (Figure 1). 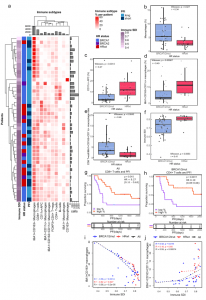 Through the study of individual cells directly in the tissue, they described how cancer cells hide in different ways, depending on the specific gene mutation. They reported that the body’s immune system is more effective against tumours with a mutation in BRCA1/2 genes. Tumours without these mutations have a connective tissue barrier prohibiting the interaction between the cancer and immune cells.

“…single-cell analysis highlights the functional and spatial differences in the TME landscapes of BRCA1/2-deficient and HRwt tumors, underscoring the need for differential treatment strategies for these clinical subgroups. Uncovering the effects of tumor genotypes on the TME, cellular phenotypes, and spatial communities will enable the development of more effective immunotherapeutic strategies and improved patient stratification in HGSC.”