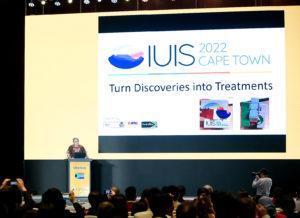 Peter Doherty gave a brilliant history of Immunology and Vaccinology, highlighting that the Ebola Vaccine was the first vaccine to be developed by immunologists. During his talk, he highlighted the importance of making discoveries and publishing them. “A discovery is a discovery it doesn’t matter what journal it is in. Talmage and Macfarlane Burnet (1960 Nobel Prize winner with Peter Medawar) published some of their research findings in an obscure journal (partly because they were unsure of their discovery and did not want the limelight if they were wrong). Part of these findings contributed to the research he received a Nobel Prize for.” He also echoed the importance of building on discoveries made by other people, “…We stand on the Shoulder of Giants”, breakthroughs are made by small incremental discoveries”. The importance of this was further echoed by Tasuku Honjo, who gave a brilliant history and overview of the discoveries that contributed to his 2018 co-awarded Nobel Prize with James P. Allison. During his talk, he stated that “It took one of his graduate students more than 4 years of murine experiments to observe a phenotype [ of nephritis and arthritis] in PD-1 knock out mice.” This illustrates the perseverance and will one needs to have, to pursue the research they truly believe will make a valuable contribution to the field. Jules Hoffman also gave a very good history on the valuable contributions entomology immunology has made to our understanding of innate immunity. During his talk, he also highlighted the importance of collaborations and attending international (and local) conferences, as it is an amazing opportunity to network.

These wonderful talks paved the way for a well-attended (over 6500 participants) and research packed conference, that covered different aspects of immunology under 4 main themes: Adaptive Immunity, Innate Immunity, Immunology and Diseases, and Interventions. For people who were unable to attend the conference but would like to know what was presented, please read the abstract book which was published in the European Journal of Immunology.