This year the IUIS-FAIS Immuno-Ethiopia course co-sponsored by the IUIS, FAIS and Volkswagen Foundation took place between 23rd-29th of February in Bahir Dar, Ethiopia. The theme of this meeting was Neglected Tropical Diseases and Malaria challenges in Sub-Saharan Africa. Over the next few weeks, we shall highlight rapporteur reports of talks conducted at the course.

Our second highlight is on talks that focused on understanding malaria parasite transmission, motility and emergence of anti-malarial resistance, as well as the neutrophil activity in malaria friend or foe. 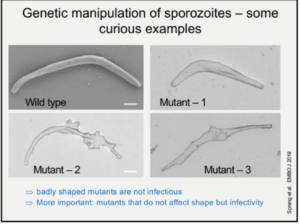 Prof. Freddy Frischknech (Ruprecht-Karis University, Heidelberg) gave a lecture on ‘’Transmission of malaria – from microscopy to experimental vaccine studies’’. He opened his speech by sharing general information about malaria transmission, burden and mortality. He explained the transmission mechanism of the parasite, emphasizing the infective stage (Sporozoites), from how sporozoites are formed inside the insect vector, to their movements patterns in vitro and in vivo. His talk highlighted the importance of microscopy imaging in understanding sporozoite motility and the role it plays in infectivity. He showed images depicting the movement of sporozoites inside the salivary gland, upon a blood meal, their motility after inoculation, their entry into the blood vessels and migration to other sites. Prof. Frischknecht  shared interesting findings on genetically manipulated sporozoites. 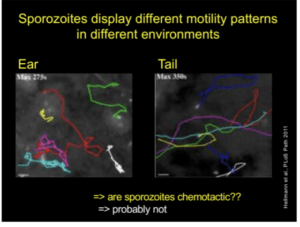 Where inducing mutant sporozoites changes the shape, speed and motility patterns, resulting in reduced infectivity. Since the mutation also change sporozoite shape (compared to the wild type), researchers are developing mutants that affect infectivity but not shape . Prof. Frischknecht also illustrated different sporozoite motility patterns depending on microenvironemnt. However, the reason for these differences has not yet been identified. Finally, he concluded his talk by highlighting the importance understanding sporozoite biology in developing drugs and attenuated vaccines which targets motility of sporozoites. He also gives an insight on ongoing research activity on the function of CSP in vivo. 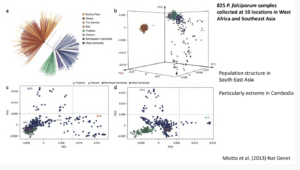 Dr. James Cotton (Wellcome sanger institute, Cambridge), addressed the audience on the topic ‘‘Genomic insight into malaria parasite population genetics’’.10-100 parasites (sporozoite) are transferred during a mosquito bite. This creates an “enormous bottleneck” in the genomic population responsible for malaria infection. Plasmodium genomes are 80% AT-rich, less complex with high intra-similarity. Once in the human host, the parasite undergoes rapid multiplication which results in high mutation rates. During Dr Cotton’s talk he discussed how malaria parasites develop anti-malarial resistance relatively quickly, he spent majority of his talk focusing on artemisinin-resistant populations. 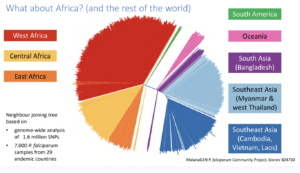 Artemisinin resistance was first reported in Western Cambodia in 2017 when treatment failure and requirement of a higher dose to clear the parasite was reported. Whole-genome sequencing of the resistant parasite identified artemisinin-resistant genes on locus 13. Further GWAS of parasites isolated in South-East Asia identified 9 significant loci and 20 different changes in locus protein (Kelch 13 mutation, Miotto et al., 2015). Artemisinin resistance thus far has not been reported in Africa, South America nor South Asia and Oceania (Pearson et al., 2019). However, there is still a  risk of ART-resistant parasite dissemination to other global regions, as seen with chloroquine and sulphadoxine resistance. He then highlighted how mutant k13-proppeller polymorphism strongly correlates with parasite survival and clearance rate. Finally, he gave his final remarks on how the presence of these resistant genes can threaten the world’s malaria control and elimination efforts.

Prof Herrmann explained that NETs have been associated with several pathologies and induce chronic inflammation ( Boetz et al., Front. Immunol 2017). Aggregated NETs(aggNETs) could initiate the resolution of inflammation, while bad aggNETs are involved in the obstruction of vessels and ducts. This appears to be the case in acute pancreatitis, cholestasis and rheumatoid arthritis. It has been described that NETs with trapped parasites circulate in children infected with P. falciparum (Baker et al., Malar J 2008). Prof Herrmann concluded his talk by discussing how aggNET can cause more malaria pathology. Specifically, the parasites use hypoxanthin for metabolism and convert it into crystalline urate. The urate crystals are released during rupture of RBC and together with hemozoin induce aggNET formation. A clinical sign of cerebral malaria is the occlusion of the capillary bed (best seen in the eyes).