IUIS-ALACI-ACAAI Immuno-Colombia 2021 course took place remotely between 5th to 16th April. The theme of this meeting was “Mechanisms and Approaches to Immunotherapy for Cancer and Chronic Inflammatory Diseases”. 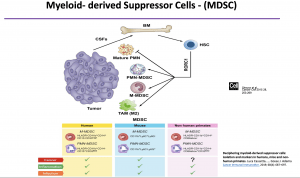 The rise of immunotherapy has provided the hope of less toxic and highly efficient cure strategies for cancer patients. Despite, encouraging results from CAR T cells clinical trials for haematological malignancies, the objective response rate of immunotherapy, in general, is still poor in solid tumours [1, 2]. Among the cellular component of an immunosuppressive tumour microenvironment (TME), myeloid-derived suppressor cells (MDSCs) are implicated in immunotherapy failure [3]. During the Immuno-Colombia course, Professor Augusto Ochoa gave a lecture entitled “MDSCs: wound healing meets cancer immunotherapy”, focused on: (i) characteristics, (ii) physiologic functions, (iii)  role in tumour progression and metastasis, (iv) and the potential as therapeutic targets of MDSCs.

MDSCs are implicated in many pathological processes that are associated with chronic inflammatory conditions such as cancers, obesity and severe COVID-19. However, they were first described as a critical component in wound healing mechanisms. Indeed, MDSCs are not intrinsically deleterious and gain harmful effector functions under influence of a molecular microenvironment that is chronically inflamed, very high in lipids, hypoxic, acidic and hypoglycaemic. In such microenvironments, MDSCs induce impairment of T lymphocytes and natural killer cell antitumor functions mainly through the production of arginase-1. MDSCs also promote tumour expansion with additional immune mechanisms (mediated by PD-L1 and TGF-β) and non-immune mechanisms that support cancer stemness, tumour invasion and metastasis. 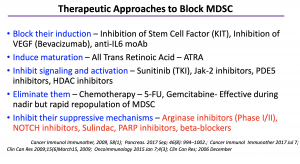 From a therapeutic perspective, Professor Augusto Ochoa highlighted that depleting MDSCs might not be effective. The most efficient approaches are more likely to be based on molecules such as Etomoxir which acts by inhibiting fatty acid oxidation in MDSCs that trigger immunosuppressive activity. He also discussed the complexity of obesity, inflammation and cancer. He then shared research data that suggests that obesity is associated with higher levels of granulocytic-MDSCs than non-obese individuals and increases MDSCs expression of lipid receptors. Despite the increased uptake of lipids that activate immunosuppressive functions, obesity-induced G-MDSCs are not immunosuppressive. Thus suggesting that other mechanisms independent of G-MDSCs associated with increased cancer risk in obese individuals. 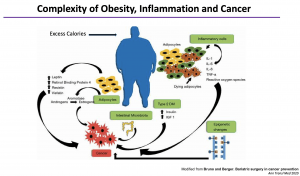