A Broad Overview of HIV Treatments and Cures 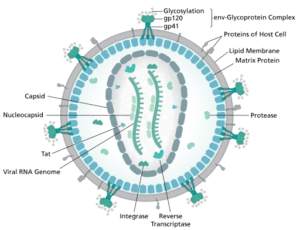 Since HIV can lay dormant in memory CD4+ cells, HIV can resurface when a patient discontinues ART. Due to the latent nature of HIV, there are multiple definitions of a “cure for HIV.” A sterilizing cure is a complete eradication of HIV from the patient. An ART-free remission does not eradicate HIV from the body, but reduces the HIV reservoir enough to decrease the risk of viral rebound. Alternatively, a functional cure allows the patient to discontinue ART by modifying the immune system to control viral reservoir levels without therapy.

Different strategies have emerged in the attempt to cure HIV. The shock-and-kill treatment tries to shock latent cells into expressing HIV genes. When the latent cells begin producing viral antigens, the immune response can attempt to eradicate them. However, shock-and-kill therapies struggle with killing latent cells once they have been shocked. Developing an HIV vaccine should be possible in theory. By using broadly neutralizing antibodies, the HIV envelope proteins can be bound, preventing cell infection. Efforts to create this vaccine are hampered by the highly variable sequences in the envelope gene and the inaccessibility of stable isotopes. While studies on Simian Immunodeficiency Virus (SIV) have shown that SIV latency can be prevented by inducing effector memory T cells against SIV, results have not been very consistent. Gene therapy is a new field of study that directly modifies genes in cells through DNA nucleotide editing. One promising approach to gene therapy is the modification of the CCR5 gene on CD4+ T cells. Since HIV enters CD4+ T cells by using the CCR5 receptor, the removal of CCR5 could block HIV entry in cells. This treatment would also require the interruption of ART, leading to many risks associated with an inadequate immune system.

The quest to find a cure for HIV is not a linear task. While current attempts to cure or prevent HIV are not perfect, we are getting closer to developing a functional cure. However, we should also be wary of the fact that HIV treatments are costly. HIV is a global problem and most people living with HIV are not able to afford expensive treatments. In order to properly combat HIV on a global scale, a cure must be both biologically effectively and financially accessible to underprivileged individuals.