The Two Major Pathways of T Cell Differentiation: The CD4+ T Helper and the CD8+ T Cytotoxic Populations and Their Subsets

The two major arms of the T cell system include the CD4+ T helper (Th) and the CD8+ T cytotoxic (Tc) populations.

The CD4+ Th cell population is made up of several effector subsets that include the Th1, Th2, Th17, and regulatory T-cells (Treg) populationsthat function to promote delayed hypersensitivity, antibody production (through B cell interaction), inflammation, or immunosuppression, respectively. The CD4+ Th cells and their subsets are the key orchestrators of adaptive immune responses in mammalian hosts and each of their effector subsets mobilizes a distinct module of antimicrobial immunity. Th1 cells direct the elimination of intracellular microbial pathogens, viruses, and tumors; Th2 cells induce the expulsion of intestinal helminths; and Th17 cells promote resistance to extracellular bacteria and fungi. Treg cells suppress immune and inflammatory reactions and ensure that the host’s intrinsically self-recognizing repertoire of lymphocytes does not mount a response against its own tissues or innocuous environmental antigens (Chapters 7 and 19in Immunology IV).

Shown in Figure 6 is a schematic representation of these various populations of T cells together with their functions. 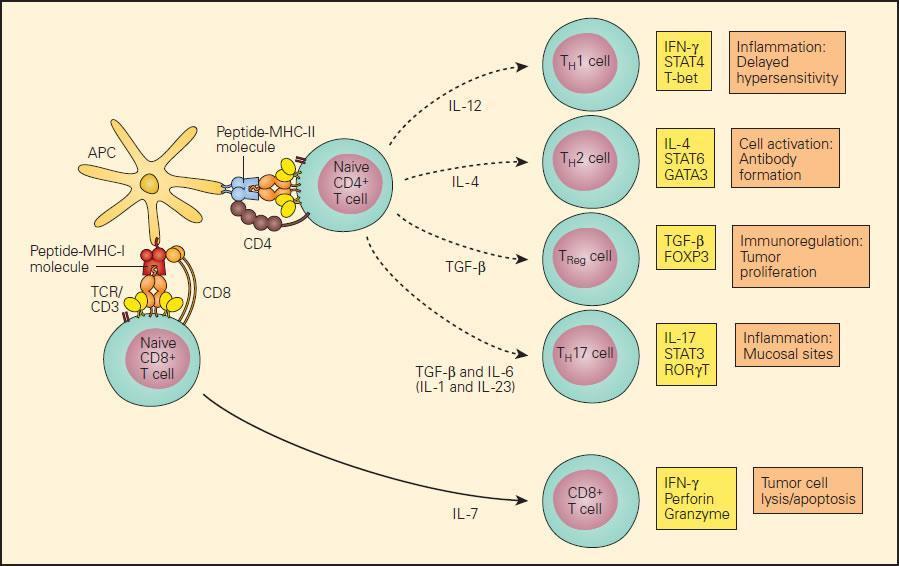 Figure 6. Schematic representation of various populations of CD4+ and CD8+ T cells together with their functions. [Reproduced with permission from Bellanti, JA (Ed). Immunology IV: Clinical Applications in Health and Disease. I Care Press, Bethesda, MD, 2012

The CD8+ Tc population is similarly comprised of subpopulations that include Tc1 and Tc2 subsets. Tc1 cells are active in the destruction of virally infected or malignant cells. During their ontogeny in the thymus and their subsequent differentiation in secondary lymphoid tissues, CD4+ T cells and CD8+ T cells undergo a sequence of complex and mechanistically distinct processes that result in the acquisition of helper or regulatory repertoire as well as cytotoxic activity, respectively (Figure 7 and Chapters 2 and 7in Immunology IV). 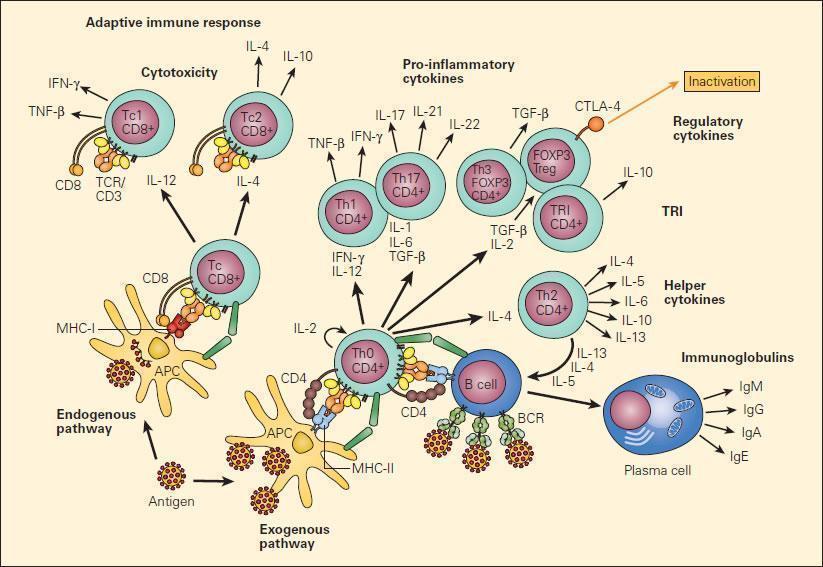 Figure 7. Schematic representation of the two major pathways of T cell differentiation: the Th and Tc populations and their subsets. Following uptake and processing of an antigen by an APC shown in the figure as a dendritic cell, peptide is presented either to the CD8 population in the context of MHC-I or to the CD4 subpopulation in the context of MHC-II following which a cascading set of cellular lymphoproliferative and differentiative steps are initiated under the inductive influence of cytokines that ultimately determine their effector functions. [Reproduced with permission from Bellanti, JA (Ed). Immunology IV: Clinical Applications in Health and Disease. I Care Press, Bethesda, MD, 2012 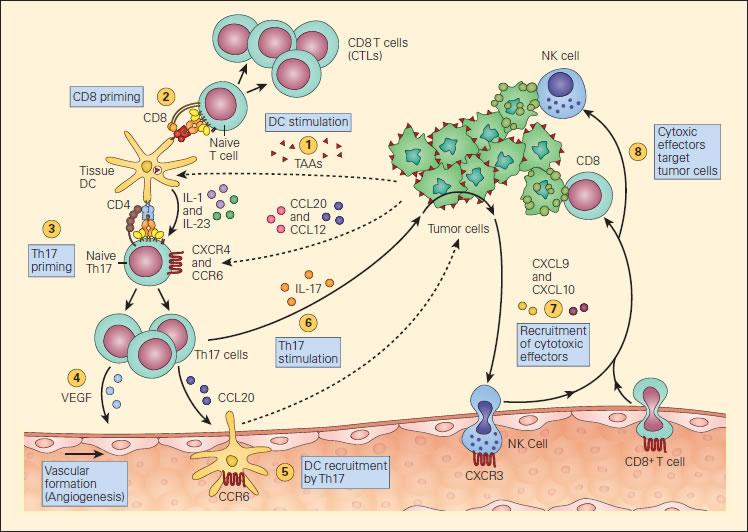 The Role of Th17 Cells in Tumor Immunity

Th17 cells play important roles in either antimicrobial protection at mucosal surfaces (Chapters 8, 13, and 15in Immunology IV) or in the promotion of inflammation involved in the pathogenesis of a number of autoimmune diseases (Chapter 19in Immunology IV). Recent studies in the experimental animal have also shown their active participation in tumor immune responses. Shown in Figure 8 is a schematic representation of the various pathways that Th17 cells play in antitumor immunity.