IMMUNOCOLOMBIA
GET OUR MONTHLY NEWSLETTER
Immunopaedia > Online Courses > Previous IUIS Courses > IUIS-ALAI Immuno-Colombia > Introduction to innate and adaptive immunity in the context of cancer > The Role of the Adaptive Immune System in Tumor Immunity: Recognition of TAAs on Tumor Cells by T Cells and Other Cells

The Role of the Adaptive Immune System in Tumor Immunity: Recognition of TAAs on Tumor Cells by T Cells and Other Cells

It is now well accepted that tumor cells express antigens that are capable of being recognized by T cells. These tumor-associated antigens (TAAs) comprise short amino acid peptide segments, which might be derived from any intracellular protein. T cells recognize these TAAs through their T-cell receptors (TCRs) in the context of major histocompatibility complex antigens class I or II (MHC-I or –II) on the surface of tumor cells or antigen-presenting cells (APCs), respectively (Chapters 7 and 10in Immunology IV).

Two distinct pathways have been identified for the processing of TAAs, the exogenous and endogenous pathways (Figure 1 and Chapter 10in Immunology IV). In the endogenous pathway, tumor cells continually degrade unfolded intracellular proteins within the proteosome into short peptide fragments. Following transport through several pathways in the endoplasmic reticulum, these fragments are then loaded onto the MHC-I. The final MHC-I/peptide complexes are then transported to the tumor cell surface through the Golgi apparatus for presentation to CD8+ T cells (Figure 1). 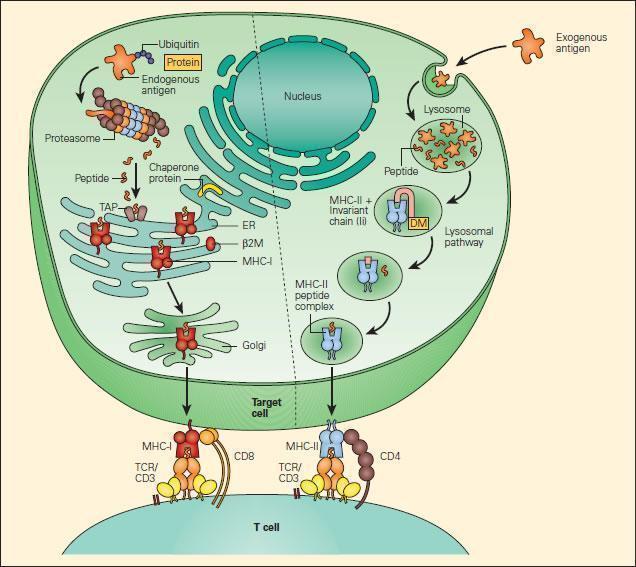 In the exogenous pathway, professional APCs, including dendritic cells and macrophages, through a variety of endocytic pathways, take up intracellular proteins that have been released from damaged or injured tumor cells (Chapter 10in Immunology IV). These intracellular proteins can then be degraded in lysosomal pathways to peptides that, when complexed with MHC-II on the cell surfaces, are presented to CD4+ T cells. Alternatively, the APCs may also process the tumor proteins through the endogenous pathway. In this way, APCs are able to prime both MHC-I and MHC-II responses and give rise to specific antibody and cell-mediated immune responses important in tumor immunity.

Adaptive immune cells, such as B lymphocytes, CD4+ helper T lymphocytes, and CD8+ cytotoxic T-lymphocytes (CTLs), distinguish themselves from innate leukocytes by expression of somatically generated, diverse antigen-specific receptors, which are formed as a consequence of random gene rearrangements that allow a more flexible and broader repertoire of responses than those conducted by innate immune cells, which express germline-encoded and more stereotyped receptors (Chapters 6 and 7in Immunology IV)

The thymus-derived (T) dependent cell-mediated immune system, thus, recognizes tumor cells by virtue of their TCR receptors found on two universes of T cells: (1) the CD4+ helper and (2) the CD8+ cytotoxic populations. The MHC-II/peptide complexes expressed on the surface of APCs and presented to naïve T cell CD4+ helper cells are followed by further maturation intoTh subsets with different functions. The recognition of peptide-MHC complexes by T cells through their TCRs allows the immune system to discriminate those tumor antigens that are distinct from self antigens, as the latter have either induced deletion of self-recognized T cells or developed tolerance (Chapters 7 and 19in Immunology IV). This development of tolerance is now considered a prime mechanism underlying immune evasion by cancer cells and therefore a prime target for immune intervention.

T cell activation requires two distinct signals. Signal 1 is delivered by the interaction between the TCR and the antigenic peptides presented on MHC molecules. Signal 2 is provided by one of several nonspecific co-stimulatory molecules such as the binding of CD28 on T cells with B7 family molecules on APCs. Another molecule that binds to the B7 family, cytotoxic T lymphocyte antigen 4 (CTLA-4), also known as CD152, transmits an inhibitory signal to T cells in contrast to CD28, which transmits a stimulatory signal. CTLA-4 is also found in regulatory T cells and may be therefore important to their suppressive function.