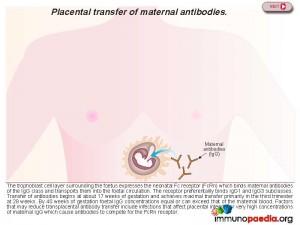 The immune system of neonates is relatively under-developed and relies on maternal antibodies transmitted in utero to modify and control the severity of neonatal diseases. These antibodies are of the class IgG, which can be transported across the placenta. This is an active, selective process that involves intracellular pathways and is specifically mediated by the neonatal Fc receptor FcRn. Fc receptors are expressed by the trophoblastic cell layer which surrounds the developing foetus. Once the receptor has bound IgG it is transported to the foetal circulation.

Premature infants born before 28 weeks gestation have very low levels of maternal antibodies and prematurity is also responsible for impaired cellular immunity. Having impaired humoral and cellular responses results in a “physiological immunodeficiency” which leaves premature infants vulnerable to both viral and bacterial pathogens. 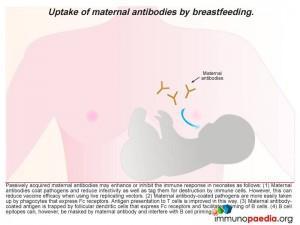 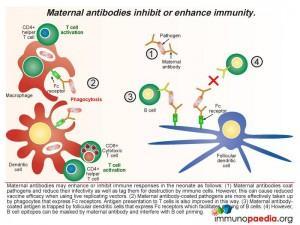 The ways in which maternal antibodies enhance neonatal immunity includes interference with growth of the pathogen and by facilitating organism removal by a process of opsonisation. The antibody-coated pathogens are also more easily taken up by phagocytes that express Fc receptors which improves antigen presentation to T cells. In addition, maternal antibody-coated antigen is trapped by follicular dendritic cells that express Fc receptors thus allowing priming of B cells. However, there are also times when maternal antibodies can inhibit the immune response in the newborn. Even though it is normal functioning for maternal antibodies to coat pathogens to reduce infectivity and mark them for destruction, this can also bring about the undesired effect of reducing vaccine efficacy when using live replicating vectors because they are rapidly destroyed or growth is impeded (eg. oral polio vaccine or measles virus vaccine). Antibody coating can also mask B cell epitopes thereby interfering with B cell priming.

Go to the Associated Case Study 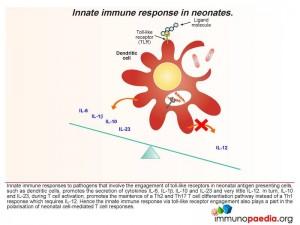 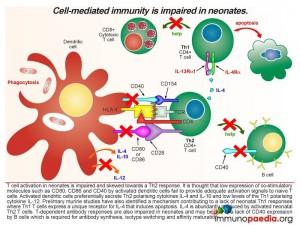 Without the passive acquisition of maternal antibodies, the immature nature of neonate humoral and cellular immunity can result in the infant being highly vulnerable to bacterial and viral infections in the perinatal period. Maternal antibodies confer an immunological advantage to the child until the infant immune system has developed to the point of self-sufficiency. The following should be noted about neonatal immunity:

Go to the Associated Case Study