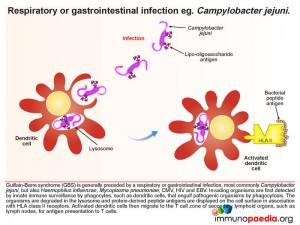 Introduction
Guillain-Barre syndrome (GBS) is classically thought of as a rapidly progressive acute polyneuropathy. Several pathologic and aetiologic subtypes exist. These include the most commonly identified subtype – acute inflammatory demyelinating polyneuropathy (AIDP) which presents with loss of motor function, acute motor axonal neuropathy (AMAN) which affects motor function in children and acute motor-sensory axonal neuropathy (AMSAN) which affects both motor and sensory function. Most importantly, the syndrome is generally preceded by a respiratory or gastrointestinal infection, the most common associated organism being the diarrhoea-causing bacteria Campylobacter jejuni. However, Haemophilus influenzae, Mycoplasma pneumoniae, CMV, HIV and EBV have also been associated with GBS. The risk of developing GBS may also occur following vaccination.

Immunopathology of GBS
The important immunological concept being explored in this case study is molecular mimicry, where it is thought that cross-reactivity of antibodies directed towards  the original infecting organism with epitopes on gangliosides found on neurons and myelin occurs. These antibodies cross the blood-nerve barrier and mediate immune attack on peripheral nerves. Inflammatory responses produce cytokines that upregulate vascular integrins to facilitate immune cell infiltration as well as increasing the permeability of capillary endothelial cell linings, which leads to  diffusion of proteins, particularly immunoglobulins, across the blood-nerve barrier. In GBS, cerebrospinal fluid samples often contain elevated levels of protein but low numbers of cells, as presented in this case. 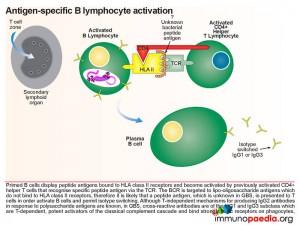 Initially, antibodies are directed towards lipo-oligosaccharides which are non-protein containing antigens. Antibodies are produced by B cells that are primed and activated in the secondary lymphoid organs where the lipo-oligosaccharide antigens are displayed on the surface of follicular dendritic cells. Naive B cells expressing B cell receptors recognise these antigens and induce endocytosis of the antigen-receptor complex. Although the target antigen is not a protein, it is likely that pathogen-derived protein components are involved in B cell activation since cross-reactive antibodies in GBS have been identified as belonging to the IgG1 and IgG3 class. For polysaccharide antigens, it is known that T-independent isotype switching occurs from IgM to IgG2, whilst T-dependent antibody production is known to occur in the presence of  peptide antigens displayed by HLA class II receptors. The CD4+ helper T cells then activate B cells, which produce IgM and then later isotype switch to  IgG1 and IgG3.   These isotypes of antibodies bind well to Fc receptors found on macrophages, for example, and are potent activators  of the 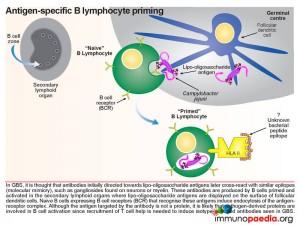 classical complement cascade, which assists with the clearance of infecting organisms. Such clearance is achieved via three main mechanisms: (a) IgG antibody-dependent cell cytotoxicity (ADCC) mediated by natural killer cells; (b) receptor-mediated phagocytosis via opsonisation of the pathogen with IgG or complement C3b proteins and (c) activation of the classical complement cascade by IgM and IgG and formation of the membrane attack complex. In GBS, however, anti-ganglioside IgG antibodies trigger similar immune attacks involving complement activation and phagocytic activity against peripheral nerves resulting in demyelination of the nerve sheaths or damage to nerve axon or motor end-plates 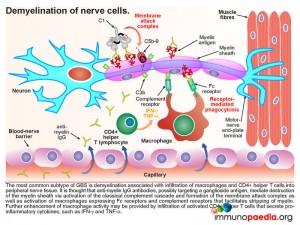 Demyelination of nerve cells
Looking at this in more detail the most common subtype of GBS: acute inflammatory demyelinating polyneuropathy (AIDP) – the demyelination process is associated with infiltration of macrophages and CD4+ helper T cells into peripheral nerve tissue (usually motor neurons). It is thought that anti-myelin IgG antibodies, possibly targeting a ganglioside antigen, mediate destruction of myelin via the classical complement cascade and formation of the membrane attack complex, as described above. This also activates macrophages expressing Fc receptors for antigen-bound IgG and complement receptors for surface bound C3b that facilitate stripping of myelin. Further enhancement of macrophage activity is also thought to be due to secretion of pro–inflammatory cytokines from CD4+ helper T cells. The resulting destruction  of myelin  by immune cells and membrane attack complexes gives rise to the clinical manifestation of classical rapidly progressive acute polyneuropathy. The patient exhibits all the symptoms described in our case study; progressive symmetric ascending muscle weakness, paralysis and hyporeflexia with or without sensory or autonomic symptoms. Although our patient was intubated and ventilated in time by the clinical team, her muscle weakness was causing respiratory failure, which would have been fatal. The axon demyelination was most likely occurring primarily in peripheral nerves and spinal roots but may also involved her cranial nerves. 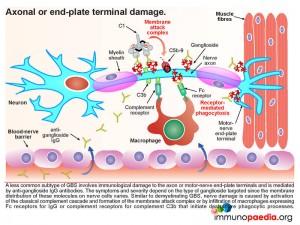 Axonal or end-plate terminal damage
Probably unlikely in our patient, but is worth noting, is a less common variant of GBS involving immunological damage to the axon or motor-nerve end-plate terminals, mediated by anti-ganglioside IgG antibodies. The symptoms and severity depend on the type of ganglioside targeted since the membrane distribution of these molecules on nerve cells varies. Similar to AIDP GBS, immunological damage to nerve cells is caused by activation of the classical complement cascade and formation of the membrane attack complex  and by infiltration of macrophages expressing Fc receptors for IgG  and complement receptors for C3b that initiate phagocytic processes.