HHV-8 infection and how it evades the immune system

Kaposi’s sarcoma (KS), is a spindle cell, angioproliferative, tumour-like lesion that typically develops in the skin, eventually disseminating to multiple cutaneous sites, viscera and lymph nodes. Initially a rare disease, it has increased in prevalence globally because of its association with HIV. In this discussion, we will outline the types of KS, the intrinsic association with human herpes virus type 8 and the immunology behind the development of lesions.

In spite of the clear clinical differences, all forms of KS are associated with human herpes virus type 8 (HHV-8) also known as Kaposi sarcoma-associated herpesvirus (KSHV). Other diseases associated with KSHV include primary effusionlymphoma or body-cavity-based-lymphoma (PEL/BCBL) found in AIDS patients and Multicentric Castleman’s disease (not discussed here).

KS lesions may also develop in internal organs such as lung and GIT.  This disseminated disease is associated with a greater degree of immunosuppression.  Signs and symptoms of GIT involvement can include the following: 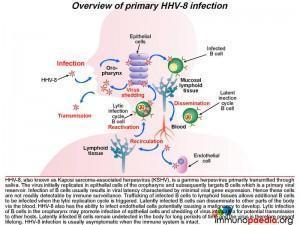 Latently infected B cells then travel to different areas around the body. Those that traffic to lymphoid tissues may be triggered into the lytic replication cycle by various signals such as inflammation.  Lytically infected B cells are thought to promote infection of other cell types such as endothelial cells.  Infected hosts will typically remain asymptomatic provided their immune system is intact, but may shed virus asymptomatically in saliva from time to time. In our case study, the patient has an immunocompromised immune system, due to HIV infection, and thus her ability to control HHV-8 is poor. HHV-8 infection of endothelial cells is necessary for the development of Kaposi sarcoma. 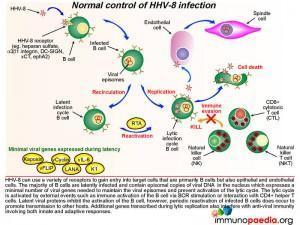 HHV-8 can use alternative receptors, including heparin sulphate, a3b1 integrin and DC-SIGN, to gain entry into target cells. As decribed, the target cells are primarily B cells but the virus can also infect epithelial and endothelial cells. Once infected, most B cells are latently infected, containing episomal copies of viral DNA which expresses a minimal set of viral genes needed to maintain the viral episomes and prevent activation of the lytic cycle. These minimal viral genes are depicted in graphic 2 as Kaposin, vFLIP, vCyclin, LANA, vIL-6 and K1.

The lytic cycle may be activated by external events such as immune activation of the B cell via B cell receptor (BCR) stimulation or interaction with CD4+ helper T cells. Latent viral proteins normally inhibit the activation of infected B cells. Viral genes transcribed during both latent and lytic replication cycles subvert innate and adaptive anti-viral immune responses. HHV-8 infection of vascular endothelial cells transforms them and causes them to adopt a spindle cell morphology (through the action of latency associated genes).  These spindle cells produce cytokines which cause them to proliferate and under normal conditions this proliferation is well controlled. 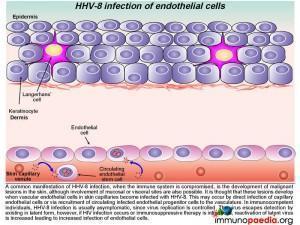 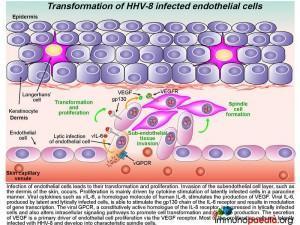 Infection of endothelial cells leads to their transformation and proliferation by virus encoded gene products. Invasion of the subendothelial cell layer, such as the dermis of the skin, occurs. Proliferation of spindle cells is mainly driven by cytokine stimulation. Viral cytokines produced by virus-infected cells such as viral (v) IL-6, a homologue molecule of human IL-6, stimulates the production of vascular endothelial growth factor (VEGF). Viral IL-6, is able to bind to the gp130 chain of the human IL-6 receptor, but does not need to bind the co-receptor to exert its activity.  Because of this the vIL-6 acts on a wider range of target cells (although it is intrinsically less active than the human protein).

The virus also expresses a constitutively active homologue of the IL-8 receptor, known as viral GPCR, which is a key protein in the KS disease process.  It is expressed in lytically infected cells.  It activates intracellular signaling pathways (in the same cell expressing it) to induce production of a battery of cytokines including:  IL-8, IL-6, IL-1b, TNFa, bFGF and VEGF.  The secretion of VEGF is a primary driver of endothelial cell proliferation via the VEGF receptor. Most of the proliferating cells are latently infected with HHV-8 and develop into characteristic spindle cells. 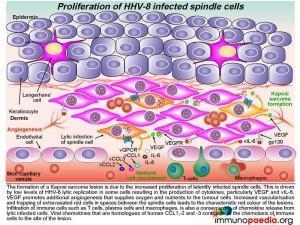 The formation of a KS lesion is due to the increased proliferation of latentlly infected spindle cells. This is driven by low numbers of HHV-8 infected cells that are in the lytic phase.   The cytokines produced by these cells, particularly VEGF and vIL-6 drive the other spindle cells to proliferate (by para-crine oncogenesis). VEGF promotes additional angiogenesis that supplies oxygen and nutrients to the tumour cells. Increased vascularisation and trapping of extravasated red cells in spaces between the spindle cells leads to the characteristic red colour of the lesions. Infiltration of immune cells such as T cells, plasma cells and macrophages, is also a consequence of chemokine release from lytic infected cells. Viral chemokines that are homologues of human CCL1,-2 and -3 contribute to the chemotaxis of immune cells to the site of the lesion.

KS is not a mono-clonal malignancy.  Rather, it is the result of polyclonal proliferation of virus infected spindle cells.  This process is driven by viral genes, most of which are expressed in lytically infected cells.  In an early KS lesion, most of the proliferating spindle cells are latently infected.  Occasional lytically infected cells secrete key cytokines that act in a para-crine fashion to drive the surrounding cells to proliferate further, recruit inflammatory cells to the lesion and induce angiogenesis. 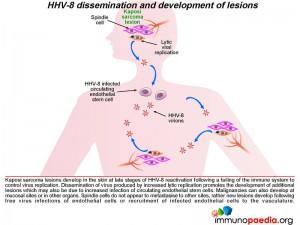