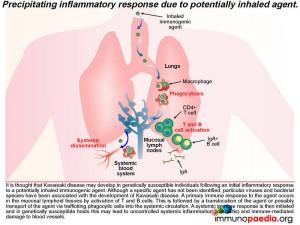 It is thought that KD may develop in genetically susceptible individuals following an initial inflammatory response to a potentially inhaled immunogenic agent. Although no specific agent has been identified, prior infection by one of a number of viruses and bacterial species has been associated with the development of KD. These include EBV, HIV, measles, Staph. aureus, Strep. pyogenes and Mycoplasmapneumoniae, to name a few. A primary immune response to the agent occurs in the mucosal lymphoid tissues by activation of T and B cells, which is then thought to be followed by a translocation of the agent or possibly transport of the agent via trafficking phagocytic cells into the systemic circulation. A systemic immune response is then initiated and in genetically susceptible hosts this may lead to the uncontrolled systemic inflammation and immune-mediated damage of blood vessels or vasculitis.

What are the signs of this developing vasculitis in Kawasaki Disease?

The ensuing vasculitisis thought to be mediated by uncontrolled activation of CD4+ T cells and antigen-presenting cells and subsequent cytokine-mediated activation of medium vessel endothelial cells. The increased levels of cytokines such as IL-1,TNF-alpha and IL-6 cause the prolonged fever as seen in this patient. Along with IFN-g, these pro-inflammatory cytokines promote endothelial cells to up-regulate cell-adhesion molecules and secrete cytokines that recruit additional immune cells. Extravasation of immune cells into the subendothelium leads to immune-mediated damage to the elastic lamina and smooth muscle cells.  This weakens the blood vessel wall that in time can progress to aneurysm formation and scarring. When coronary arteries are involved it can result in ischaemic heart complications (not present in this patient). Excessive inflammatory responses to antigens in the skin also occur because there is increased trafficking of immune cells from cutaneous blood vessels into the dermis.  This can result in a persistent generalized rash and BCG scar activation, as seen during the course of illness in our patient. 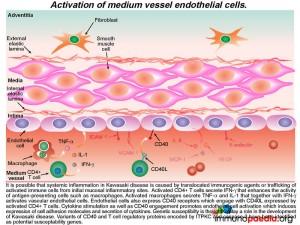 The activated CD4+ T cells secrete IFN-g that enhances the activity of phagocytic cells such as macrophages. Activated macrophages secrete TNF-a and [simple_tooltip content=’Interleukin 1(IL-1) has many functions on many different cells and is secreted by a number of cells including macrophages, monocytes and dendritic cells. It also helps to activate T helper cells by acting as a co-stimulator with the antigen presenting cell receptors and it helps promote the maturation and clonal expansion of B cells.’]IL-1[/simple_tooltip] that together with IFN-g activates vascular endothelial cells. Endothelial cells also express CD40 receptors, which engage with CD40L (CD154) present on the surface of activated CD4+ T cells. 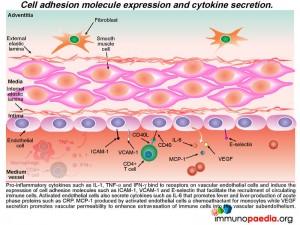 The resulting tethered CD4+ cells to the vascular endothelium secrete cytokines, which further activates the endothelial cells and induces them to express further cell adhesion molecules (ICAM-1, VCAM-1 and E-selectin) and secreteIL-1, TNF-a and IFN-g. Genetic susceptibility is thought to play a role in the development of Kawasaki disease. In particular, polymorphisms in two genes encoding the T cell regulatory protein ITPKC and Caspase-3. We will uncover these specific events towards the end of our discussion.

Activated endothelial cells also secrete IL-6 in sufficient amounts to promote fever by acting on the hypothalamus and to induce the liver to synthesize acute phase proteins (such as CRP). MCP-1 is a chemo-attractant for monocytes and VEGF promotes vascular permeability and enhances extravasation of immune cells into the sub-endothelium.

Recruitment of monocytes and neutrophils to the endothelium

Activated monocytes, recruited to the sub-endothelium by interacting with the adhesion molecules (ICAM-1 and VCAM-1) on endothelial cells, mature into macrophages and secrete pro-inflammatory cytokines such as IL- 1, IL-6 and TNF-a. 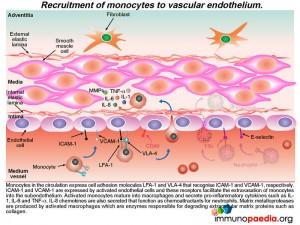 Neutrophils are also recruited to the activated endothelium by recognition of E-selectin that binds to ESL-1. Neutrophil recruitment is enhanced by IL-8, a chemokine released by activated monocte / macrophages Neutrophils then extravasate into the subendothelial tissue where they secrete elastase, a serine protease that degrades elastin of connective tissue. Activated monocytes / macrophages release matrix metalloproteases, protease enzymes that degrade extracellular matrix proteins, such as collagen.How this damages the subendothelium is discussed in greater detail a little later. 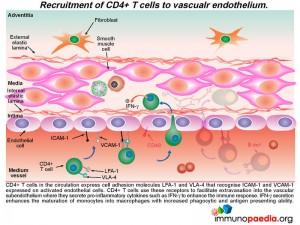 Additional CD4+ T cells in the circulation that express cell adhesion molecules LFA-1 and VLA-4 bind to ICAM-1 and VCAM-1 that are expressed on activated endothelial cells. This CD4+ T cell interactionfacilitates extravasation into the subendotheliumwhere they further secrete IFN-g, which in turn, enhances the maturation of monocytes into macrophages with increased phagocytic and antigen presenting abilities. 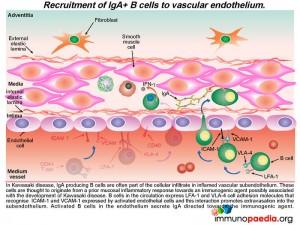 Recruitment of IgA-secreting B cells to the endothelium

In KD, IgA producing B cells are also often part of the cellular infiltrate in the inflamed subendothelium. These are thought to originate from an earlier mucosal inflammatory response to the immunogenic agent, the probable trigger leading to KD.  B cells in the circulation express LFA-1 and VLA-4 cell adhesion molecules that recognise ICAM-1 and VCAM-1 expressed by activated endothelial cells and this interaction promotes B cell extravasation into the subendothelium. Activated B cells in the endothelium secrete IgA. 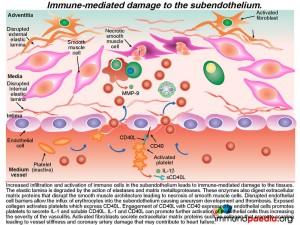 The result of this mass movement of activated cells and the effects of cytokines is damage and dissolution of the subendothelium tissues. The elastic lamina is degraded by the action of elastases and matrix metalloproteases and these enzymes also digest extracellular matrix proteins that disrupt the smooth muscle architecture resulting in necrosis of smooth muscle cells. Disrupted endothelial cell barriers allow the influx of erythrocytes into the subendothelium causing aneurysm and the development of thrombosis.

The exposed collagen activates platelets, which express CD40L(CD154). The engagement of CD40L with CD40 expressed by endothelial cells results in platelets secreting IL-1 and soluble CD40L.The release of both these solutes causes further activation of endothelial cells and severe inflammation. At the same time activated fibroblasts secrete extracellular matrix proteins, such as collagen, that promotes scarring which results in vessel stiffness. When this occurs in coronary arteries, the damage may contribute to heart disease. 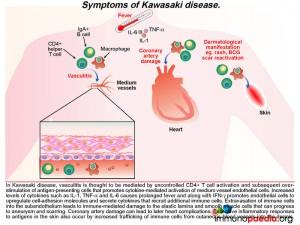 What leads to skin inflammation?

Alongside the well-documented vasculitis, skin inflammation is also often observed in patients with KD. This is seen predominantly as a polymorphous skin rash and is one of the diagnostic criteria for the disease. It is likely that the generalized skin involvement is a consequence of increased infiltration of immune cells through activated endothelium of cutaneous blood vessels into the dermis where an immune response to skin antigens can be mounted. This inflammatory response is excessive due the dysregulation of CD4+ T cells, probably leading to a predominance of Th17 cells, and the high activation state of antigen-presenting cells.  It has been noted that in regions where BCG vaccination is in use, up to a third of patients who succumb to KDalso have a reactivation of their BCG scar, along with the usual skin rash.

What is the association between Kawasaki disease and BCG scar reactivation?

Since BCG vaccination is usually given at birth and susceptible children show clinical evidence of KD months to years later, it seems likely that the immune response is directed towards antigens present in the vaccine that have persisted in the skin over time. Due to cytokine stimulation, increased numbers of T cells and antigen presenting cells infiltrate the skin (via cutaneous blood vessels) and memory BCG-specific CD4+ T cells become re-activated and clonally expand in numbers. In KD, genetic susceptibility genes that affect negative-regulation of activated CD4+ T cells may promote an excessive immune response by increased pro-inflammatory cytokine production. 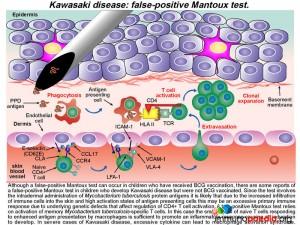 In our case study, the patient had both a reactivation of his BCG scar and a (presumed) false positive Mantoux test. While it is well recognized that children who have received BCG vaccination can sometimes have a false-positive Mantoux test due to cross-reactive immune responses to Mycobacterium tuberculosis antigens, there are also some reports of a false-positive Mantoux test in children with KD who were never BCG vaccinated. The Mantoux test involves intradermal administration of Mycobacterium tuberculosis protein antigens.   It is likely that a combination of underlying genetic defects that affect negative regulation of CD4+ T cells, an increased infiltration of CD4+ T cells into the skin and the high activation state of antigen presenting cells all lead to an excessive localized immune response in patients with KD. A true-positive Mantoux test relies on activation of memory Mycobacterium tuberculosis-specific T cells, but in this case, a small pool of naïve CD4+ T cells responding to enhanced antigen presentation may be sufficient to promote an inflammatory response causing an induration to develop. In severe cases of KD, macrophage activation syndrome may even be present, due to the highly-activated state of macrophages.

Along with the immune mediated causes for Kawasaki Disease, as discussed, we will also discuss how a genetic predisposition in the patient together with immune dysregulation plays an important role in susceptibility to KD. We explain this using our graphics below. 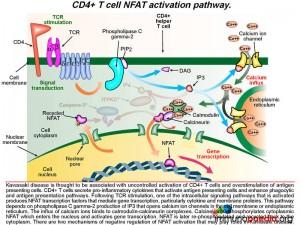 As discussed above, KD is associated with uncontrolled activation of CD4+ T cells and over-stimulation of antigen presenting cells. Following T cell receptor (TCR) stimulation after engagement with the MHC class II-peptide complex on the surface of macrophages, one of the intracellular signaling pathways that is activated results in the translocation to the nucleus of NFAT transcription factors that mediate gene transcription. This pathway depends on phospholipase C gamma-2 production of IP3 that opens calcium ion channels in the cell membrane or in the endoplasmic reticulum. Calcium ions bind to calmodulin-calcineurin complexes. Calcineurin dephosphorylates cytoplasmic NFAT, which enters the nucleus and activates gene transcription, such as cytokines and membrane proteins. NFAT is later re-phosphorylated and recycled back to the cytoplasm. There are two mechanisms of negative regulation of NFAT activation that may play a role in Kawasaki disease. 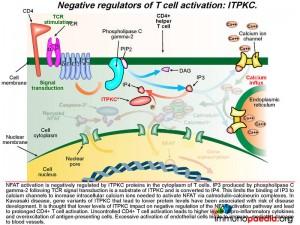 NFAT activation is negatively regulated by ITPKC proteins in the cytoplasm of T cells. IP3 produced by phospholipase C gamma-2 following TCR signal transduction is a substrate of ITPKC and is converted to IP4, which inactivates it. This limits the binding of IP3 to calcium channels to increase intracellular calcium ions needed to activate NFAT via calmodulin-calcineurin complexes. In Kawasaki Disease, gene variants of ITPKC that lead to lower protein levels have been associated with risk of disease development. It is thought that lower levels of ITPKC leads to longer persistence of IP3 following TCR signaling and prolonged activation of NFAT.  This results in prolonged and uncontrolled CD4+ T cell activation resulting in release of higher levels of pro-inflammatory cytokines and over-excitation of antigen-presenting cells. Excessive activation of endothelial cells leads to immune-mediated damage to blood vessels that have been described. 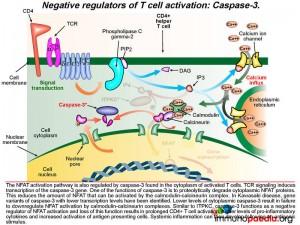 The NFAT activation pathway is also regulated by caspase-3 found in the cytoplasm of activated T cells. TCR signaling induces transcription of the caspase-3 gene. One of the functions of caspase-3 is to proteolytically degrade cytoplasmic NFAT proteins.

This reduces the amount of NFAT that can be activated by the calmodulin-calcineurin complex. In Kawasaki Disease, gene variants of caspase-3 have been associated with lower transcription levels. Lower levels of cytoplasmic caspase-3 activity leads to increased levels of cytoplasmic NFAT and prolonged CD4+ T cell activation, higher levels of pro-inflammatory cytokines and increased activation of antigen presenting cells. Systemic inflammation can then develop following an antigenic stimulus.