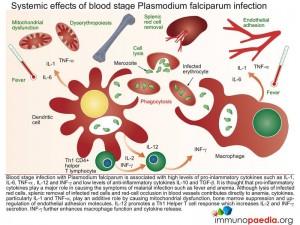 Generally it is thought that the pro-inflammatory cytokines are central to the pathophysiology of systemic disease caused by infectious and non-infectious agents. These cytokines bring about symptoms which include anorexia, malaise, myalgia, arthralgia and fever, which patients experience during systemic disease such as malaria.  Furthermore, the release of these cytokines in large amounts are responsible for severe illnesses. Of special note is TNF-α. When this cytokine is produced in appropriate concentrations it is vital to the immune response and subsequent clearance of malaria. However, pathology ensues when TNF is produced in large amounts. Many systemic diseases, both infectious and non-infectious, have been linked to this superabundant pro-inflammatory cytokine release. Effects of this release, seen in malaria, sepsis and tissue injury syndromes, include metabolic acidosis, hyperlactatemia  and encephalopathy.

During the blood stage, infection with Plasmodium falciparum  is associated with high levels of pro-inlammatory cytokines such as IL-1,IL-6, TNF-α, IL-12 and INF-γ and low levels of anti-inflammatory cytokines IL-10 and TGF-B causing symptoms associated with malaria such as fever and anaemia. Although it is also true that lysis of infected red cells, splenic removal of infected red cells and red-cell occlusion in blood vessels contributes to anaemia, cytokines, particularly IL-1 and TNF-α, play an additive role by causing mitochondrial dysfunction, bone marrow suppression and upregulation of endothelial adhesion molecules.

Furthermore, inflammatory cytokines upregulate endothelial cell adhesion molecules in order to entice circulating blood elements to undergo diapedesis and intercellular migration. In many disease states, including  malaria, these blood elements which include activated leukocytes and platelets promote coagulation. In malaria, circulating monocytes, placental macrophages and thrombin enhance adhesion by increasing CD36, a receptor known to bind parasitized erythrocytes on platelet surfaces. These adherent cells set up local foci of inflammation which produces more inflammatory cytokines. In combination with the effects of systemic inflammation, these local inflammatory reactions cause a  cycle of endothelial integrity loss, vascular permeability, cellular destruction and inflammatory cytokine release. These responses can result in complications such as decreased consciousness and coma.