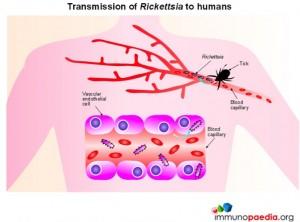 This series of graphics have been designed to explain tick bite fever transmission, host interactions, host defense and immunity, and the pathogenesis of this bacterium.

Rickettsial transmission
Members of the Rickettsia genus are Gram negative, obligate, intracellular bacteria with a life cycle that involves both an arthropod vector and a vertebrate host. Mammals constitute the principle reservoir with humans considered incidental hosts. Humans become infected from bites of infected ticks.

Rickettsial Host Interactions
Following a tick bite which causes direct inoculation into the blood vessels, Rickettsial bacteria penetrate the vascular endothelial cells by a receptor-mediated endocytic pathway. Rickettsial bacteria express Outer membrane protein B (rOmpB) which binds to host cell receptor Ku70 expressed on the surface of vascular endothelial cells. Via an enzymatic cascade, actin is polymerized which is necessary for the internalisation of the bacteria. The cell membrane then invaginates and phagocytosis of the bacterium occurs resulting in a phagosome. 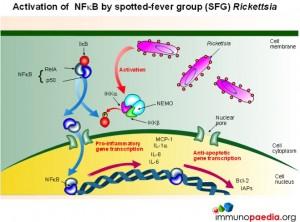