HIV and the brain

Since the widespread use of highly active antiretroviral therapy (HAART), the incidence, but not the prevalence, of HIV- associated neurocognitive disorders (HAND) has decreased. These disorders incorporate mild impairment of higher cognitive and cortical functions including minor cognitive motor disorders and asymptomatic neurocognitive impairment characterized by cognitive, motor, and behavioral abnormalities. Classification is based on patient performance in areas of neurological and behavioral functioning and neuropsychological testing. The outcomes are on a spectrum with the most severe form of HAND being HIV associated dementia (HAD) also known as AIDS dementia. HAD manifests as a subcortical dementia characterized by psychomotor slowing, changes in mood and anxiety levels and deficits in memory, abstraction, information processing, verbal fluency, decision-making, and attention. As this collection of symptoms would suggest, the brain regions most commonly damaged in HAD are the basal ganglia, deep white matter, hippocampus, and cerebral cortex.  HAD has also been noted to include deficits in olfaction which although a surprise finding allows for reliable measurement of the severity, onset, and progression of the disease using well established olfactory tests. While 40% of HIV positive patients on HAART continue to suffer from HAND, the incidence of HAD has dramatically decreased. However its prevalence is increasing, due in part to the increasing life expectancy of individuals with HIV. 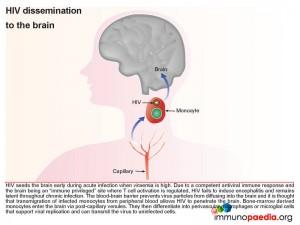 How does this happen?

First we look at HIV dissemination to the brain

The blood-brain barrier (BBB), which is comprised of a basement membrane and tight-junctions between capillary endothelial cells prevents large molecules, or pathogens, from diffusing into the brain, such as HIV. However bone marrow derived monocytes are able to enter the brain, where they then differentiate into perivascular macrophages and microglial cells. It is thus thought that because HIV is capable of infecting monocytes at a low level, during the high viraemia during acute infection, a small number of monocytes in the peripheral blood will become infected and some of these will enter the brain by transmigration across the BBB (known as diapedesis) that takes place in the post-capillary venules. However, due to a competent antiviral immune response and the brain being an “immune privileged” site where T cell activation is regulated, viral replication is controlled and no encephalitis is induced and HIV remains latent.

Although infected CD4+ T cells may also infiltrate the brain, the transmigration of infected monocytes from the systemic circulation is the proposed mechanism by which HIV initially penetrates the brain shortly after transmission. 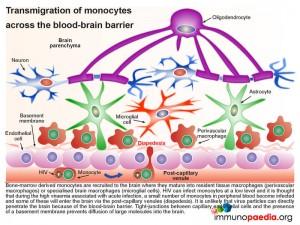 In more detail, once the infected monocytes enter the brain, they differentiate into resident perivascular macrophages or specialized brain macrophages known as microglial cells. These cells then support virus replication and can transmit virus to uninfected perivascular macrophages and microglial cells. Penetration of the brain by HIV during early infection, however, does not progress to viral encephalitis, due to adequate control of viral replication by HIV-specific CD8+ cytotoxic T cells and CD4+ helper T cells that are recruited to the brain from the periphery. HIV remains latent within perivascular macrophages or microglial cells throughout the asymptomatic period. This is in part, because the brain is an “immune privileged” site where T cell activation and inflammatory responses are regulated to avoid immune-mediated damage to neurons and glial cells. HIV propagates more efficiently in activated CD4 T cells than in macrophages or microglial cells. The turnover of virus in monocyte-derived cells is slow and non-cytopathic, hence, these cells serve as reservoirs of HIV during the chronic stage of disease. It can be shown by phenotypic analysis that strains of HIV isolated from the brain are adapted to monocyte-derived cells and preferentially use the CCR5 co-receptor for entry. 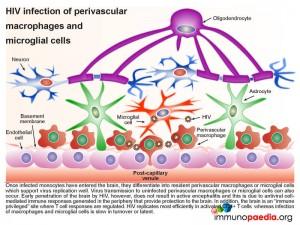 In our associated case study, it was likely that as the patient’s disease progressed, there was an eventual lack of immune control of HIV infection in the periphery.  During late stage infection or AIDS, latent HIV replication is activated, including in the brain. HIV replication in the brain resulted in an increase in inflammatory cytokines that overwhelmed the immune regulatory mechanisms and lead to damage of neurons resulting in the presenting HAD. Neuropathological manifestations of HIV replication in the brain includes: a) death of neurons and astrocytes; b) activation of astrocytes and microglial cells; c) formation of microglial nodules, c) dendritic simplification  d) demyelination; e) formation of macrophage giant cells (fusion of HIV-infected macrophages); f) viral replication in microglial cells and perivascular macrophages and g) increased infiltration of monocytes. Of note, during this stage a predominance of CD14+CD16+ and/or CD69+ monocytes are recruited to the brain. These cells are  most likely expanded during 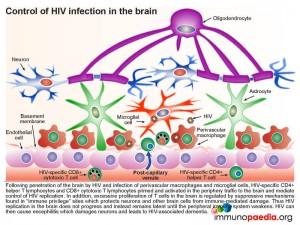 HIV infection as a result of translocation of gram negative bacterial products, such as lipopolysaccharide (LPS), from the gut. The binding of LPS to toll-like receptor 4, which uses CD14 as a co-factor, promotes activation and expansion of monocytes, which in turn are capable of trafficking to the brain and contributing to inflammation as well as re-seeding the brain with virus. It is postulated that “leaky” gut in HIV infection may in fact trigger the onset of HIV encephalitis. 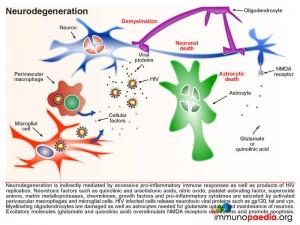 Neurons, astrocytes and oligodendrocytes are not considered targets for HIV. Neurodegeneration is thought to be indirectly caused by inflammatory mediators released from activated macrophages and microglial cells during excessive inflammatory responses as well as by neurotoxic viral products, such as gp120, tat and vpr, released from infected cells. Astrocytes are also damaged leading to reduced glutamate reuptake and diminished maintenance of neurons. Excess glutamate overstimulates the NMDA receptors on neurons, which controls calcium influx and can promote apoptosis. Damage to oligodendrocytes affects the myelin sheath necessary for nerve signal transduction. 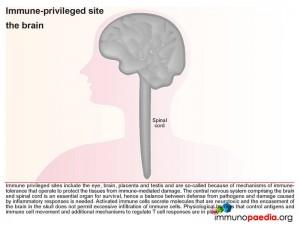 Immune privileged sites include the eye, the brain, placenta and testis and are so-called because of mechanisms of immune tolerance, which protect these vital tissues from immune-mediated damage. In our case study, uncontrolled HIV in the brain at the late stage of disease, resulted in activation of inflammatory mediators resulting in neurotoxicity and the likely irreparable damage to neurons. Therefore controlling immune-mediated damage is extremely important within immune privileged sites, ie the brain. Under normal circumstances, this is achieved by both physiological barriers that control antigens and immune cell movement and immune regulatory mechanisms, which control T cell responses and activation of antigen-presenting cells. More detailed explanations with corresponding graphics follow below. 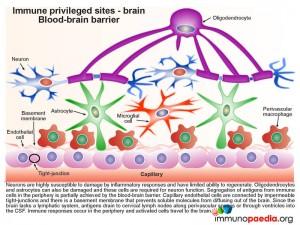 Neurons are highly susceptible to damage by inflammatory responses and have limited ability to regenerate. Oligodendrocytes and astrocytes, required for neuron function, are also vulnerable to immune-mediated damage. The BBB thus provides a physiological barrier comprised of capillary endothelial cells connected by impermeable tight-junctions and a basement membrane that restricts the passage of immune cells into the brain and prevents brain-derived antigens from diffusing into the peripheral circulation 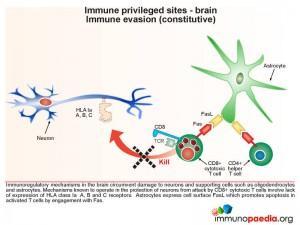 Immunoregulatory mechanisms in the brain circumvent damage to neurons and supporting cells such as oligodendrocytes and astrocytes. This includes a constitutive lack of expression of MHC class I molecules (known as HLA class Ia A, B and C), and hence the inability to be attacked by CD8+ cytotoxic T lymphocytes (CTL). Astrocytes express cell surface FasL to promote apoptosis in activated T cells by engagement with surface expressed Fas. 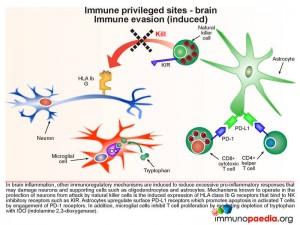 During an inflammatory response in the brain, some immunoregulatory mechanisms are induced in order to limit the extent of immune damage.

One of the mechanisms known to protect neurons from attack by natural killer cells is the induced expression of HLA class Ib G receptors that bind to NK inhibitory receptors, such as KIR (killer immunoglobulin-like receptors). This results in the inhibition of NK cell function which is usually triggered by the lack of detection of HLA class I A, B and C receptors. Another inducible inhibitory mechanism, is the ability of astrocytes to promote apoptosis in activated T cells by upregulating surface PD-L1 receptors which can engage with PD-1 on T cells. Microglial cells can also inhibit T cell proliferation by mediating depletion of the essential amino-acid tryptophan with expression of indolamine 2,3-dioxygenase (IDO) enzymes. 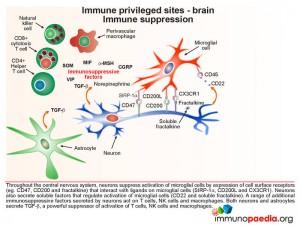 Microglial cells are abundant in the brain and serve to phagocytose apoptotic cell debris and harmful substances in the extracellular fluid. They can become activated and potentially damage neurons when there is an infection. Throughout the central nervous system, neurons suppress activation of microglial cells by expression of cell surface receptors that interact with ligands on microglial cells and soluble factors that regulate activation. They also secrete a range of additional immunosuppressive factors which act on T cells, NK cells and macrophages.

In a situation such as HAD (and in the associated Case Study), the inflammatory responses that result from uncontrolled HIV replication, overwhelm these processes that preserve the integrity of the brain compartment.