Measles virus typically causes an acute disease characterized by fever, coughing, coryza, photophobia, nausea, and a macular red rash over most of the body. In rare instances measles virus may infect the central nervous system (CNS) as acute viral encephalitis, or result after 2 – 4 weeks in a post-infectious immune-mediated inflammatory disorder or acute disseminated encephalomyelitis (ADEM). In addition there are 2 rare and latent CNS complications which result from a preceding measles infection, namely, subacute sclerosing panencephalitis (SSPE) caused by years of viral persistence in a seemingly immunocompetent host, and subacute measles encephalitis (SME) which occurs in an immunocompromised host. Unlike SSPE, SME manifests sooner becoming apparent 1 – 7 months after the acute measles infection. These patients usually present with seizures, often epilepsy partialis continua and an altered mental status. The condition carries a mortality rate of 85% and survivors often have significant psychomotor retardation.

This discussion looks at this rare complication of measles infection, the neurological complications that develop and the immunological processes involved. 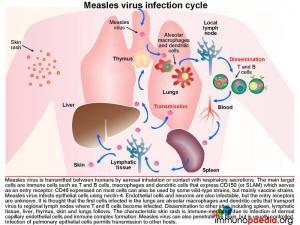 Measles virus is transmitted between humans by aerosal inhalation or contact with respiratory secretions. The main target cells are immune cells such as T and B cells, macrophages and dendritic cells that express CD150 (or signalling lymphocyte activation molecule [SLAM]) which serves as an entry receptor for measles. CD46 expressed on most cells can also be used by some wild-type strains but mostly by vaccine strains. Measles virus infects epithelial cells using nectin-4 as a receptor.  It is also able to infect endothelial cells and neurons, but the entry receptors are unknown. It is thought that the first cells infected in the lungs are alveolar macrophages and dendritic cells that transport virus to regional lymph nodes where T and B cells become infected. Dissemination to other sites such as the spleen, lymphatic tissue, liver, thymus, skin and lungs follows. Measles virus is highly cytolytic.  In peripheral tissues, adjacent infected cells may fuse together forming giant cells, or syncitia.  This process occurs through the action of the viral fusion protein which is expressed on the surface of infected cells.  The characteristic skin rash is immune-mediated due to infection of dermal capillary endothelial cells and immune complex formation. Infection of lung epithelial cells which occurs late during the infection cycle mediates transmission to other hosts.

Measles virus can also penetrate the brain, but is usually controlled by the immune system. 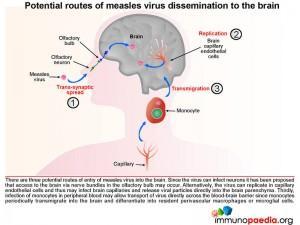 How does measles virus enter the brain parenchyma?

There are three potential routes of entry of measles virus into the brain:

The following three graphics explain each of these routes in more detail: 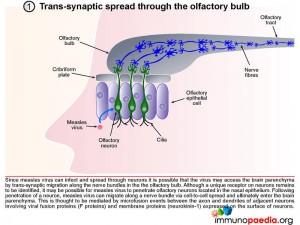 1.  Trans-synaptic migration through the olfactory bulb

Since measles virus can infect and spread through neurons it is possible that the virus may access the brain parenchyma by trans-synaptic migration through nerves in the olfactory bulb. Although a unique receptor on neurons remains to be identified, it may be possible for measles virus to penetrate olfactory neurons located in the nasal epithelium. Following penetration of a neuron, measles virus can migrate along a nerve bundle via cell-to-cell spread and ultimately enter the brain parenchyma. This is thought to be mediated by microfusion events between the axon and dendrites of adjacent neurons involving viral fusion proteins (F protein) and membrane proteins expressed by neurons (neurokinin-1). 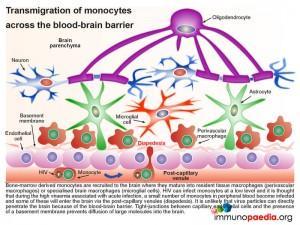 2. Transmigration of monocytes across the blood-brain barrier

Bone-marrow derived monocytes are recruited to the brain where they mature into resident tissue macrophages (perivascular macrophages) or specialised brain macrophages (microglial cells). It is possible that measles virus can infect peripheral blood monocytes through the CD150 receptor. Some of these infected cells may enter the brain via the post-capillary venules (diapedesis) and thereby transport measles virus across the blood-brain-barrier. It is unlikely that virus particles can directly penetrate the brain because of the blood-brain barrier. Tight-junctions between capillary endothelial cells and the presence of a basement membrane prevents diffusion of large molecules into the brain. 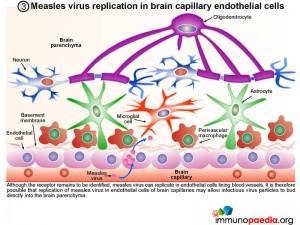 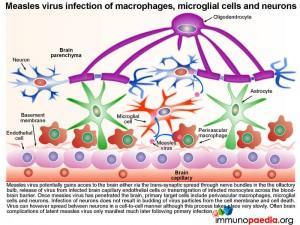 Once dissemination to brain tissue has occurred

Irrespective of the route of dissemination to the brain, once measles virus has penetrated the brain the target cells include perivascular macrophages, microglial cells and neurons.  Importantly infection of neurons does not result in budding of virus particles from the cell membrane but instead viral spread occurs between neurons in a cell-to-cell manner with no induction of cytolysis. 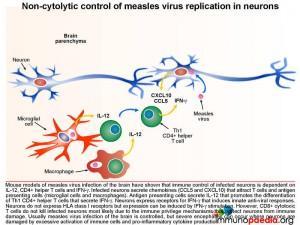 How the brain tissue controls infection

Mouse models of measles virus infection of the brain have shown that immune control of infected neurons is dependent on IL-12, CD4+ helper T cells and IFN-g. Infected neurons secrete chemokines (CCL5 and CXCL10) that attract T cells and antigen presenting cells (microglial cells and macrophages). Activated antigen presenting cells secrete IL-12 that promotes the differentiation of Th1 CD4+ helper T cells that secrete IFN-g and IL-2. Neurons express receptors for IFN-g that induces innate anti-viral responses. Although neurons do not express HLAclass I receptors, as part of the immune privilege mechanisms in the brain that prevent CD8+ cytotoxic T cell attack, it has been shown that IFN-g stimulation can induce expression of HLA class I receptors on neurons. However, in the mouse model of measles virus infection of the brain, CD8+ cytotoxic T cells did not lyse infected neurons possibly due to additional immune privilege protective mechanisms in the brain.[link to immune privilege brain section]. Usually measles virus infection of the brain is controlled, but sometimes severe encephalitis occurs where neurons are damaged by excessive activation of immune cells and pro-inflammatory cytokine production. 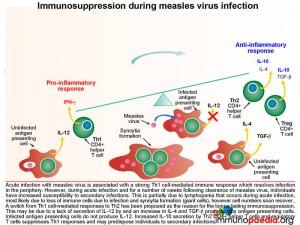 Acute infection with measles virus is associated with a robust Th1 cell-mediated immune response which resolves infection in the periphery. However during acute infection and for a number of weeks following clearance of measles virus, individuals have increased susceptibility to secondary infections. This is partially due to lymphopenia that occurs during acute infection, however cell numbers recover quickly. A switch from Th1 cell-mediated responses to Th2 has been proposed as the reason for longer lasting immunosuppression. This is possibly due to a lack of secretion of IL-12 by antigen presenting cells and an increase in IL-4 and TGF-b production. Also infected antigen presenting cells do not produce IL-12. A corresponding increase in IL-10 secretion by Th2 CD4+ T cells and regulatory T cells suppresses Th1 immune responses and may predispose individuals to other infections. 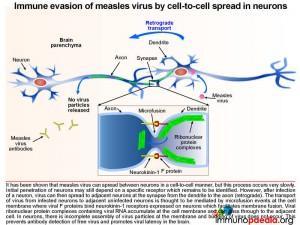 How does the measles virus evade the immune system to result in SME?

It has been shown that measles virus can spread between neurons in a cell-to-cell manner, but this process occurs very slowly. Initial penetration of neurons may still depend on a specific receptor which remains to be identified. However, after infection of a neuron, virus can then spread to adjacent neurons at the synapse from the dendrite to the axon (retrograde). The transport of virus from infected neurons to adjacent uninfected neurons is thought to be mediated by microfusion events at the cell membrane where viral F proteins bind neurokinin-1 receptors expressed on neurons that facilitate membrane fusion. Virus ribonuclear complexes accumulate at the cell membrane and can pass through to the adjacent cell. In neurons, there is incomplete assembly of infectious virus particles at the membrane.  Budding of virus particles does not take place.  Only the ribonuclear protein complexes are replicated and move from cell to cell.  In particular the measles matrix, fusion and haemaglutinin proteins are poorly expressed.  These proteins are major targets of the specific immune response during systemic infection.   In this way the virus evades the immune response and persistent infection of the brain is established.

SME is a difficult diagnosis to confirm. Typical measles rash may be subtle or absent in an immunocompromised patient. The CSF examination is typically normal, and specific measles testing using antibodies and more sensitive PCR may be negative.  As explained absence of measles virus RNA in the CSF is probably due to the intraneuronal location of the measles virus and, unlike non-neuronal cells, viral budding and shedding does not occur in the CNS. Furthermore, in the CNS, measles viral transmission occurs via trans-synaptic neuronal spread, which may explain the contiguous cortical spread on sequential MRI brain images. Therefore, in the absence of finding evidence of ongoing measles virus infection in the CSF in a patient where clinically there is a strong suspicion of previous measles infection, a definitive diagnosis would require brain biopsy.