Buschke and Lowenstein (GCBL) is a slow-growing, locally destructive verrucous plaque that typically appears on the penis but may occur elsewhere in the anogenital region. It is a rare sexually transmitted disease, affecting 0.01% of the general population. The virus responsible for GCBL is human papillomavirus (HPV), usually type 6 or 11 and occasionally 16, 18 and 45. In our case study the patient was shown to be infected by multiple HPV strains; HPV- 6, 11, 55, 58, 59, 68, 73, 83 and cp 6108. GCBL may occur at any age after puberty and is characterized by invasive growth. There is a high rate of recurrence after treatment with 20-30% of cases undergoing malignant transformation. Clinically, most cases of GCBL appear on the glans penis but may occur on any ano-genital mucosal surface, including the vulva, vagina, cervix, anus, scrotum and bladder. If untreated, GCBL can cause destruction of tissues extending into the pelvic organs. In the case presented, GCBL started on the prepuce as a plaque and slowly expanded into a cauliflower-like mass, reaching 9cm in length. GCBL lesions have been shown to grow as large as 15cm. Although neither malignant transformation nor additional complications occurred in this case, it is important to note that these lesions can form extensive local destruction, with ulcerations, bleeding, fistulation and undergo malignant transformation.

Risk factors and predisposing factors which promote HPV infection resulting in GCBL include chronic phimosis and poor penile hygiene. This may account for the higher incidence in males who are uncircumcised. Immunosuppression secondary to HIV infection or immunosuppressants is also a major predisposing factor. Other risk factors include multiple sexual partners, chronic genital infections and pregnancy (associated with an impaired immune response)

To understand how HPV infects mucosal surfaces to form GCBL and occasionally resulting in malignant transformation, it is important to first understand the pathophysiology and immune evasion strategies of HPV. All mechanisms described are carefully illustrated in stepwise graphics to assist with understanding. Click on each graphic for an enlarged version.

Human papillomavirus (HPV) targets the squamous epithelium found beneath the foreskin of the penis (illustrated), the scrotum, vulva, vagina, cervix, anus or bladder. Specifically the basal epithelial cell layer, the deepest epidermal layer, is necessary for HPV replication. The virus gains access to this depth of the squamous epithelium via micro-wounds and abrasions. During subsequent wound repair basal cells upregulate α6ß4 integrin which interacts with L1, a capsid protein, found on the surface of the HPV virion. This interaction promotes internalization of the virus. Evidence to support this process of HPV gaining cell entry has been shown by the use of antibodies targeting capsid proteins L1 and L2 that results in blocking attachment of virions to the basal epithelial cells during micro-wound healing.

Circumcision also reduces the risk of HPV infection, although the mechanism of protection is not clearly defined. The removal of the foreskin may decrease the occurrence of micro traumas to the squamous epithelial layer beneath the foreskin thereby decreasing the opportunity for HPV replication in this area.  However infection can take place anywhere on the penis including the penile shaft, glans/corona and scrotum. 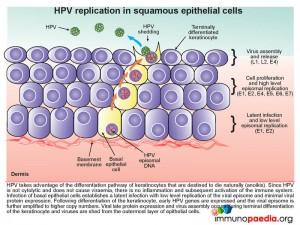 The epidermis, which is the outer layer of the skin, is made up of squamous epithelium. The epidermis is composed of 4-5 layers of cells; the cornified layer (stratum corneum), clear/translucent layer (stratum lucidum), granular layer (stratum granulosum), spinous layer (stratum spinosum), and the deepest layer the basal/germinal layer (stratum basale/germinativum). The predominant cell type is the keratinocyte, whose primary function is the formation of a barrier against environmental damage such as pathogens, heat, UV radiation and water loss. Keratinocytes differentiate as they move through the cell layers, starting as basal keratinocytes. Keratinization is part of the physical barrier formation, in which keratinocytes produce more and more keratin and eventually undergo natural cell death and detachment (anoikis). The fully cornified keratinocytes that form the outermost layer of the epidermis are constantly shed off and replaced by new cells. Squamous epithelium is avascular and nourished by diffusion from the underlying dermis.

HPV takes advantage of the differentiation pathway of keratinocytes and the fact that the cells die naturally with subsequent detachment, a process known as anoikis. Since HPV is not a cytolytic virus and does not cause viraemia, there is no inflammatory response initiated during HPV infection. Infection of the basal epithelial cells establishes a latent infection with low level replication of the viral episome and minimal viral protein expression (E1 and E2). As the keratinocyte differentiates, other early HPV genes are expressed (E1, E2, E4, E5, E6 and E7) and the viral episome is amplified with high level episomal replication. Finally during the terminal differentiation of the keratinocyte in the stratum corneum late viral protein expression (L1, L2) and virus assembly occurs. Thereafter, following the natural desquamation process where the outermost layer of epithelial cells are shed, virus is shed at the same time. 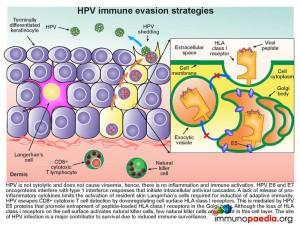 Although most people clear HPV and develop antibody responses, HPV can also employ several evasion strategies to avoid immune surveillance. These are listed below and illustrated in this graphic on the right.

How is the Development of Carcinoma associated with HPV?

Of the 120 known types of HPV isolated from humans, 40 types are sexually transmitted and spread easily through the genital tract of men and women. Although in our case study, the wart was not malignant, a small group of HPV types are known as high-risk, oncogenic or carcinogenic and have been shown to cause penile, cervical, vulval and anal cancers. HPV types 16, 18, 31, 33, 35, 45, 52, and 58 are known to be amongst the high-risk oncogenic HPVs and are the most important types in cervical cancer. How does this occur? Persistent infections with these high-risk HPV types can cause cell abnormalities with the possibility of malignant transformation. Although penile cancer has a relatively rare occurrence, accounting for 0.2% of cancers, cervical cancer is one of the top five malignancies that kill women, and the leading cause of cancer-related deaths in South Africa. The patient in our case was identified to have several HPV types including the high-risk oncogenic HPV types- 6, 11 and 58, but was not shown on biopsy to have undergone malignant transformation.

The following series of graphics aims to explain the steps to development of squamous carcinoma, the commonest complication of infection with high-risk HPV types. 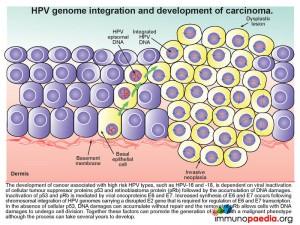 The development of cancer associated with high risk HPV types, such as HPV-16 and -18, is dependent on viral inactivation of cellular tumour suppressor proteins p53 and retinoblastoma protein (pRb) and the subsequent accumulation of DNA damages. Inactivation of p53 and pRb is mediated by viral oncoproteins E6 and E7. Increased synthesis of E6 and E7 occurs following chromosomal integration of HPV genomes carrying a disrupted E2 gene that is required for regulation of E6 and E7 transcription. In the absence of cellular p53, DNA damage can accumulate without repair and in the absence of pRB cells with DNA damage are able to undergo cell division. Together these factors can promote the creation of a cell with a malignant phenotype. The process is slow and can take several years to develop. 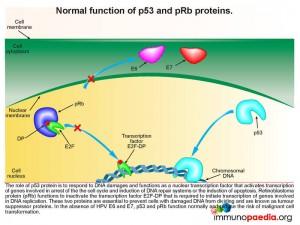 Lets look at this in closer detail. To better understand the link between HPV and malignancy, it is important to understand the events that are known to prevent malignant transformation. The normal role of p53 is to respond to damages occurring to DNA and to function as a nuclear transcription factor activating transcription of genes involved in arresting the cell cycle, induction of DNA repair systems or induction of apoptosis. Retinoblastoma protein (pRb) functions to inactivate the transcription factor E2F-DP required to initiate the transcription of genes involved in DNA replication. Together, p53 and pRb are essential in preventing cells with damaged DNA from dividing, thereby preventing malignant transformation, and are known as tumour suppressor proteins. 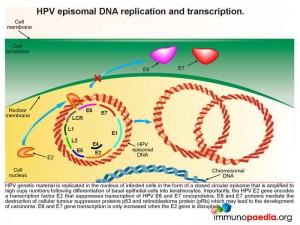 How does HPV disrupt the normal functions of p53 and pRb

When a squamous epithelial cell is infected with HPV, genetic material is replicated in the nucleus of infected cells in the form of a closed circular episome. This is amplified to high copy numbers during the differentiation process of basal epithelial cells into keratinocytes. Importantly, the HPV E2 gene encodes a transcription factor E2 that suppresses transcription of HPV E6 and E7 oncoproteins. E6 and E7 transcription can only be increased if the E2 gene is disrupted. When E6 and E7 transcription is increased they mediate the destruction of the cellular tumour suppressor proteins p53 and retinoblastoma protein (pRb) with a resulting possibility of development of carcinoma. 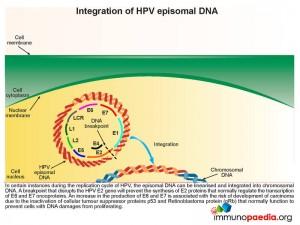 In certain instances during the replication cycle of HPV, the episomal DNA can be linearised and integrated into chromosomal DNA. A breakpoint that disrupts the HPV E2 gene will prevent the synthesis of E2 proteins that normally regulate the transcription of E6 and E7 oncoproteins. As has already been described this disruption of E2 results in an increased synthesis of E6 and E7 and the associated risk of carcinoma development. 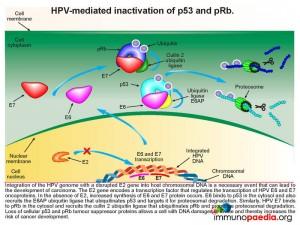 Inactivation of p53 and pRb

When there is an increased synthesis of E6 and E7, E6 binds to p53 in the cytosol and recruits the E6AP ubiquitin ligase that ubiquitinates p53 and targets it for proteosomal degradation. Similarly, HPV E7 binds to pRb in the cytosol and recruits the cullin 2 ubiquitin ligase that ubiquitinates pRb and promotes proteosomal degradation. Loss of cellular p53 and pRb tumour suppressor proteins allows a cell with DNA damages to divide thereby increasing the risk of cancer development. 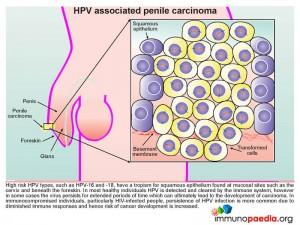 High risk HPV types, such as HPV-16 and 18, have a tropism for squamous epithelium found at mucosal sites such as on the cervix and beneath the foreskin. In most healthy individuals HPV is detected and cleared by the immune system, however in some cases the virus persists for extended periods of time which can ultimately lead to the development of carcinoma. In immunocompromised individuals, particularly HIV-infected people, persistence of HPV infection is more common due to diminished immune responses and hence the risk of cancer development is increased.