Streptococcus pneumoniae (pneumococcus) infection is a gram-positive, encapsulated bacterium, and an important and commonly encountered bacterial pathogen in humans. It is often found as a normal commensal in the nasopharynx of healthy adults and children. It does however have the potential to become pathogenic. In developing countries, including South Africa, pneumococcus remains the most common and important disease-causing organism in infants. Although exact numbers are difficult to obtain, it is estimated that pneumococcal infection is responsible for more than one million of the 2.6 million annual deaths due to acute respiratory infection in children younger than 5 years. Case fatality rates associated with invasive disease vary widely but can approach 50% and are greatest in patients who develop meningitis. The bacterium does so by escaping local host defenses and phagocytic mechanisms, and penetrates the CSF either through choroid plexus/subarachnoid space seeding from bacteraemia or through direct extension from sinusitis, otitis media or mastoiditis. Presently, it is the most common bacterial cause of meningitis, accounting for 47% of cases.

Most individuals who are colonised with pneumococcus carry only a single serotype at any given time. The duration of colonisation varies depending on bacterial characteristics such as serotype and host characteristics. Invasive disease is usually related to recent acquisition of a new serotype. However, in most healthy hosts, colonisation is not associated with symptoms or disease but allows for the continued presence of pneumococcus within the population. The bacterial capsule consists of repeating oligosaccharides and based on antigenic differences within these capsular polysaccharides, greater than 91 serotypes of pneumococcus have been identified. From these a heptavalent pneumococcal conjugate vaccine (PCV7 vaccine) has been designed which contains the 7 most common pneumococcal serotypes causing 70% of the invasive infections in children. With the implementation of childhood vaccinations (since 2000 in USA, 2009 in RSA) using this heptavalent conjugate vaccine (prevnar) for pneumococcus, colonisation rates have decreased in children receiving the vaccine. As a result, adults and other children living in the same household become less exposed and the incident cases of pneumoccocus are significantly reduced because of the phenomenon of herd immunity.

In this discussion we will explore the current understanding of how pneumococcus is able to colonise the nasopharynx, the ways in which the bacterium evades the innate immune system and how it is able to cause disease. With the aid of our graphics we will discuss the processes involved in various bacterial dissemination routes, such as to the middle ear and meninges, dissemination to the lungs and then via the bloodstream to the meninges  or dissemination via a bacteraemia to the meninges. We will also go into a more detailed discussion of the  strategies employed by the bacterium to evade the innate immune system. Pneumococcal vaccinations will not be discussed in any detail here, but will be  detailed in a separate case study. 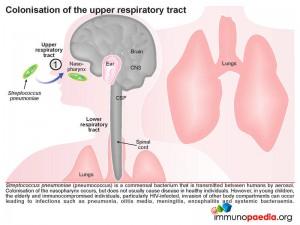 Colonisation of the upper respiratory tract

Pneumococcus is a commensal bacterium that is transmitted between humans via aerosols. In this way the bacteria colonise the nasopharynx, and typically do not cause any disease in healthy individuals. However, amongst children younger then 5 years, the elderly and immunocompromised individuals, especially those who are HIV-infected, asplenic, have complement deficiencies, humoral immunity defects or neutrophil dysfunction, they are all at a greater risk of disease resulting in infections at more distant sites such as pneumonia, otitis media, meningitis, encephalitis and systemic bacteraemia. 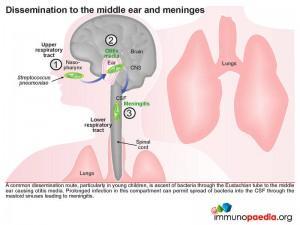 A common dissemination route, particularly in young children, is the ascent of the bacteria via the Eustachian tube to the middle ear causing otitis media. Prolonged infection in this compartment can permit spread of bacteria directly into the CSF through the mastoid sinuses resulting in meningitis. 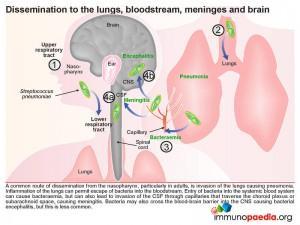 Another common route  of dissemination from the nasopharynx, particularly in adults, is seeding of the lower respiratory tract and invasion of the lungs resulting in pneumonia. Inflammation of the lungs can then permit escape of bacteria into the bloodstream. Entry of bacteria into the systemic blood system can result in bacteraemia, but can also lead to invasion of the CSF via the capillary networks that traverse the choroid plexus or subarachnoid space causing meningitis.  Alternatively bacteria can penetrate the nasopharyngeal submucosa by translocation across the epithelium and subsequent translocation of capillary endothelial cells entering the blood stream and causing bacteraemia. 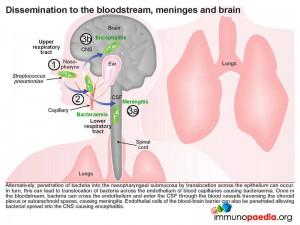 Once in the bloodstream, bacteria can cross endothelial cell barriers and enter the CSF through the blood vessels traversing the choroid plexus or subarachnoid spaces and cause meningitis. Endothelial cells of the blood-brain barrier can also be penetrated allowing bacterial spread into the CNS, resulting in encephalitis; but this occurs less often.

Now that we understand bacterial dissemination on a gross level we can take a closer look at how the bacteria  cross the upper respiratory tract epithelium and translocate the capillary endothelium to gain access to the bloodstream. 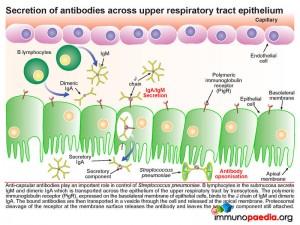 Pneumococcus interferes with the secretory antibody pathway of the upper respiratory track.  Anti-capsular antibodies play an important role in control of pneumococcal infections. B lymphocytes in the submucosa secrete IgM and dimeric IgA which is transported across the mucosal epithelium of the upper respiratory tract by transcytosis. The polymeric immunoglobulin receptor (PigR), expressed on the basolateral membrane of epithelial cells, binds to the J chain of IgM and dimericIgA. The bound antibodies are then transported in a vesicle through the cell and released at the apical membrane. Here proteosomal cleavage of the receptor at the membrane surface releases the antibody keeping the secretory component attached. 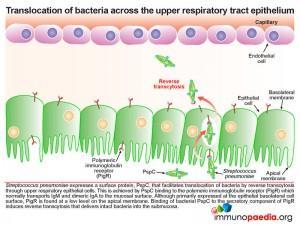 The pneumococcus, which is found in the upper respiratory tract on the apical side, the mucosal epithelium expresses its own surface protein known as PspC. This protein facilitates translocation of bacteria by reverse transcytosis through the upper respiratory epithelial cells. This is achieved by PspC essentially hijacking the polymeric immunoglobulin receptor (PigR) which normally transports IgM and dimeric IgA to the mucosal surface. Although primarily expressed at the epithelial basolateral cell surface, PigR is found at a low level on the apical membrane. Binding of bacterial PspC to the secretory component of PigR induces reverse transcytosis and in this way delivers intact bacteria into the submucosa. PigR is not expressed in the lower respiratory tract and therefore does not play a role in lung disease. 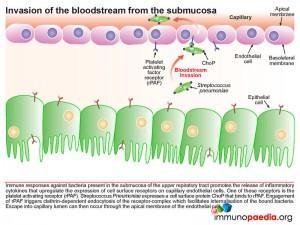 Once in the submucosa the bacteria can further  translocate across the capillary endothelium to gain access to the bloodstream. This is achieved via the presence of another cell surface protein expressed by pneumococcus known as ChoP, a phosphorylcholine  protein. The bacterium takes advantage of the immune response triggered by its presence in the submucosa of the upper respiratory tract. When inflammatory cytokines are released they upregulate the expression of cell surface receptors on the  basolateral surface of the capillary endothelial cells. One of these receptors is the platelet  activating factor receptor (PafR).ChoP is able to bind to this receptor and on engagement  PafR triggers clathrin-dependent endocytosis of the receptor-complex which facilitates internalisation of the bound bacteria. In this way the bacteria  are able to invade the bloodstream from the submucosa via escape at the apical membrane of the endothelial cell into the capillary lumen. 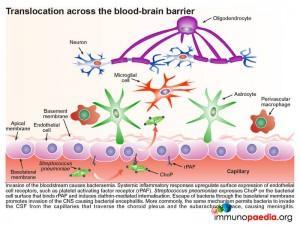 Invasion of the systemic blood system then causes bacteraemia. Systemic inflammatory responses upregulate expression of endothelial cell surface receptors, such as platelet activating factor receptor (PafR), this time on the apical membrane of endothelial cells in the capillary lumen. Since pneumococcus expresses ChoP on the bacterial cell surface which now binds to PafR and induces clathrin-mediated internalization,. escape of bacteria through the basolateral membrane of blood-brain barrier capillaries can promote invasion of the CNS causing bacterial encephalitis. The same mechanism can allow bacteria to invade the CSF from the capillaries that traverse the choroid plexus and the subarachnoid space causing meningitis.

In healthy individuals pneumococcus colonises the nasopharynx without invading the epithelium and becoming pathogenic. However, to maintain survival in the upper respiratory tract and promote invasion of other compartments the bacteria have evolved and developed immune evasion techniques to ensure ongoing survival. Each of these immune evasion strategies are discussed in more detail, below. 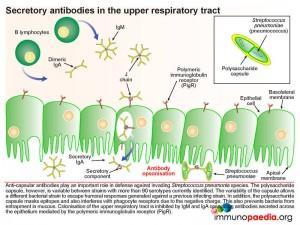 Anti-capsular antibodies play an important role in defense against invading pneumococcal species. The polysaccharide capsule, however, is variable between strains with more than 91 serotypes currently identified. The variability of the capsule allows a different bacterial strain to escape humoral responses generated against a previous infecting strain. In addition, the polysaccharide capsule masks other potential epitopes and interferes with phagocyte receptors due to its negative charge. This negatively charged capsule is also able to prevent entrapment of the bacteria in the naturally occurring mucous lining the nasopharynx. Colonisation of the upper respiratory tract is also inhibited by secretory IgM and IgA opsonising antibodies which are  transported across the mucosal epithelium by the polymeric immunoglobulin receptor (PigR). 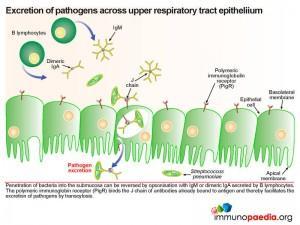 Should the bacteria penetrate into the submucosa this process can be reversed by opsonisation with IgM or dimeric IgA which is secreted by  plasma B lymphocytes in the submucosa. Again the polymeric immunoglobin receptor (PigR) plays an important role. Here it binds the J chain of antibodies already bound to bacterial surface antigen and thereby facilitates the excretion of  bacteria by transcytosis. 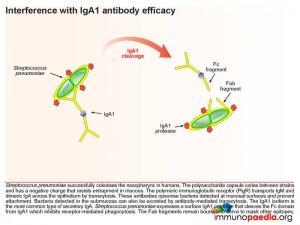 However pneumococcus has also developed a response to interfere with IgA1 antibody (the most common type of secretory IgA) efficiency and expresses a surface IgA1 protease that cleaves the Fc domain from IgA1. In this way it inhibits Fc receptor-mediated phagocytosis. The Fab fragments also remain bound and serve to mask other epitopes. 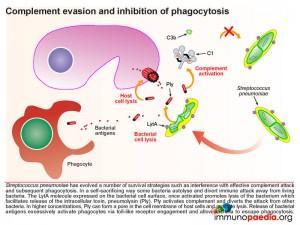 Complement evasion and inhibition of phagocytosis

Pneumococcus has also evolved a number of survival strategies which interfere with effective complement attack and subsequent phagocytosis. In a self-sacrificing way, some bacteria autolyse and divert immune attack away from living bacteria. The LytA molecule expressed on the bacterial cell surface, once activated, promotes lysis of the bacterium which facilitates release of the intracellular toxin, pneumolysin (Ply). Pneumococcus isolates produce few toxins however, all serotypes produce Ply. Ply activates complement and diverts the attack from other bacteria. In higher concentrations, Ply can form a pore in the cell membrane of host cells and promote lysis. Release of bacterial antigens excessively activates phagocytes via toll-like receptor engagement and allow bacteria to escape phagocytosis. 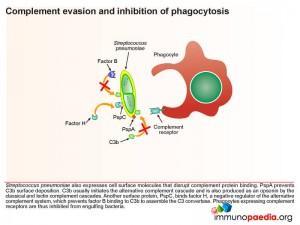 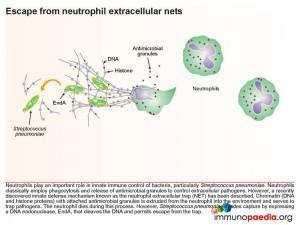 One final immune evasion technique which Streptococcus pneumoniae has adapted is escape from neutrophil extracellular nets. Neutrophils play an important role in innate immune control of bacteria, and classically employ phagocytosis and release of antimicrobial granules to control extracellular pathogens. However, a recently discovered innate defense mechanism known as the neutrophil extracellular trap (NET) explains how chromatin (DNA and histone proteins) which attach antimicrobial granule proteins is extruded from the neutrophil into the environment and serves to trap pathogens. The neutrophil is sacrificed during this process. However, pneumococcus is able to evade capture by expressing a DNA endonuclease enzyme, EndA, that cleaves the DNA and permits escape from the trap.

All of the above methods of immune evasion show how pneumococcus has evolved to survive as a commensal in the nasopharynx of humans.